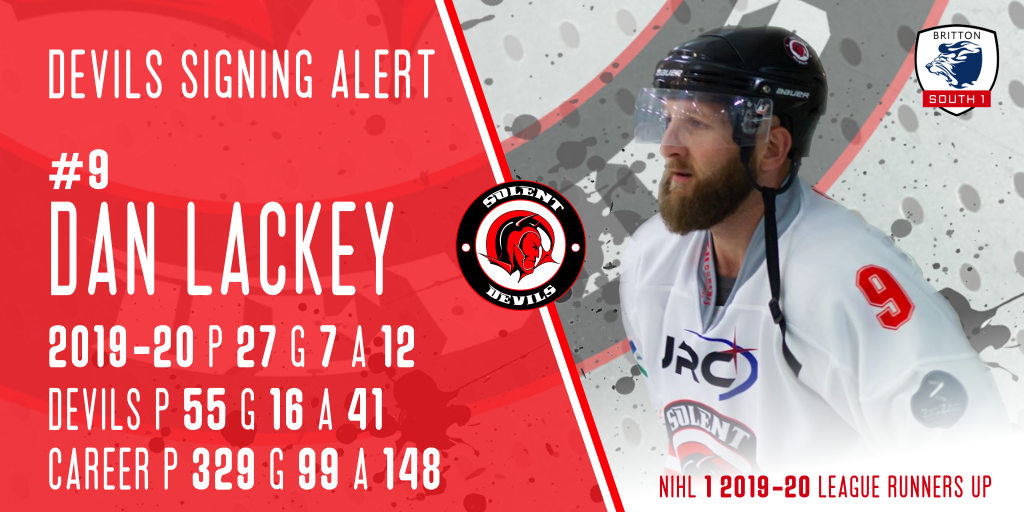 Today, the Solent Devils are delighted to announce the re-signing of Dan Lackey

Lackey returns to the Devils for his third consecutive year, having spent most of his hockey career in Basingstoke.

“I’m very happy to be back in a Devils shirt next year,” says Lackey, “a lot of credit goes to Muzza for what he has achieved with the club’s direction – I’m sure his dad would be very proud.  It makes it an appealing place to be.  The club is professionally run, from the off-ice team through to the dressing room, so it means we can just focus on playing hockey.  The fans are great too, they turn up every week and make a hell of a lot of noise, which is great to play in front of.”

Solent Devils head coach, Alex Murray, spoke of his excitement at Lackey’s re-signing with the Devils,

“Dan is a very experienced, versatile player.  I’m delighted Dan has agreed to return to Solent.  Lackey is a team first guy, who likes to get his nose dirty and can play any role for the team, including roles on both special teams.”

Last season, Lackey picked up 7 goals and 12 assists in 27 games, bringing his Devils stats up to 55 games played, with 16 goals and an impressive 41 assists – including one during their play off run at the end of the 18/19 season.

“I’m quite critical of myself, I expect a lot so always want more!” says Lackey, modestly, “I’m happy overall with the two years at Solent, that’s why I am back – oh, and to try and get some more silverware back to the Thunderdome!”

Murray, however, is somewhat more vocal about the solid player’s contribution to the team,

“Dan was exceptional last year, a close contender for Coach’s player and Player’s player due to his team first attitude and hard work ethic.  His performances were amongst the best in the team, week in week out, he competes consistently at a high level.”

Continuing to be modest, the quietly spoken Lackey goes on to say,

“I think I mentioned it last year, but I am not really a points guy.  At the end of the game, there are only two points that matter.  I’m just as happy standing in front of shots as putting the puck in the net.  One of my main skills is my versatility, other than taking Chico’s place, I played in every position last season.  One thing I think I can improve on though, is scoring, a few more goals may help the team, and we are all here to win.”

Murray’s confidence in the experienced player is evident though,

“Dan knows what it takes to play at this level.  I think for the team next season, we will still need Lackey to be versatile as we manage player availability and injuries, but I know regardless of what role Dan plays, he will perform to his best.”

Lackey will return to the Devils in shirt #9.  If you would like to sponsor a Devil, or find out about becoming a team sponsor, contact devilssupporters@outlook.com.