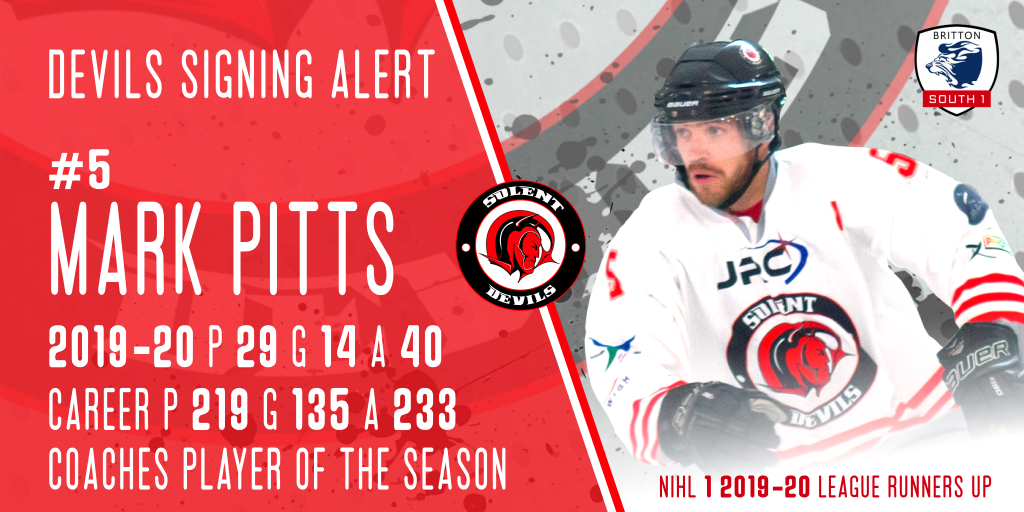 Pitts returns to the Devils for his fifth consecutive year, where he has been a solid player for the club as they battled back in the old NIHL 1, and was a part of the team that lifted the Playoff cup at the end of the 2018/19 season.

“Everyone is here because they enjoy playing hockey, everyone wants to be here,” says Pitts.  “There are never any arguments or animosity in the team, we have an excellent core of guys who make sure the dressing room has one of the best atmospheres I’ve ever been a part of.  Additionally, the Devils off ice team and the Devils organisation as a whole, is second to none.”

“I’m thrilled to welcome back one of the best centremen in the league,” says Alex Murray, Solent Devils head coach, “Mark is by far the most underrated player in the league, he is equipped to play in any moment of the game, in whatever role is required.  His work effort and attitude is exceptional, leading by example for all of our younger players.

“Goals and assists are something I’ve never really paid much attention to,” Pitts says.  “I had plenty of opportunities to put the puck in the net last season that I missed, so that’s obviously something to improve on next season.  Overall, I am happy with my points production last season – it becomes much easier when you’re centring two of the best scorers in the league!”

Murray though, is clearly excited by the contribution from Pitts last season,

“Mark was simply our best all round player last season.  His ability to play any role, at any time means he is indispensable to our team.”

Pitts’ senior career has been an impressive 219 games since 2005, starting in Guildford, moving to Basingstoke in 2007, then joining the Solent Devils for the 2016/17 season, where he has now played 107 games, driving home 52 goals and helping out with 117 assists, making his career contributions, so far, a huge 135 goals with 233 assists.  These numbers though, don’t seem to excite the humble player,

“As I said, scoring is important, but I’s never been my focus, I leave that to the guys with flair and skill.  I focus a lot on endurance and strength, and I try to do the ugly stuff well – battling in the corners, blocking shots, taking hits trying to make a play.  Working at both ends of the ice is vital for me, there’s no point in being offensively strong if you’re defensively weak, so being fit enough to cover the whole ice, for the whole game, is a priority for me.”

Looking towards the new season, Murray makes it clear that he doesn’t expect Pitts to change his attitude towards games,

“Next season, I am looking for pretty much the same.  I think if there was any area of improvement, Mark would agree that it would be his finishing – that said, I am entirely happy with Mark as a player, and I am delighted he is back again!”

Pitts, ever the team player, is looking to what the team can achieve, but seems confident in the team he will be with and having Alex Murray at the helm,

“If the league structure remains similar, a top three finish would be a good target this year.  It is a highly competitive league with some very good teams, most people didn’t give us a chance last season and I feel we proved everyone wrong, but we will need to pick it up again this season.  Every game will be a fight, but with the team Muzza is putting together I am sure we will be up for the challenge.”

Pitts will return to the Devils in shirt #5.  If you would like to sponsor a Devil or become a team sponsor, contact devilssupporters@outlook.com.