The ice is marked out with three distinct area’s known as the defensive zone, the neutral zone and the offensive zone, with face off circles and dots at various locations.

Below is what the ice looks like at the start of a Devils game and where each zone is and the main playing rules. 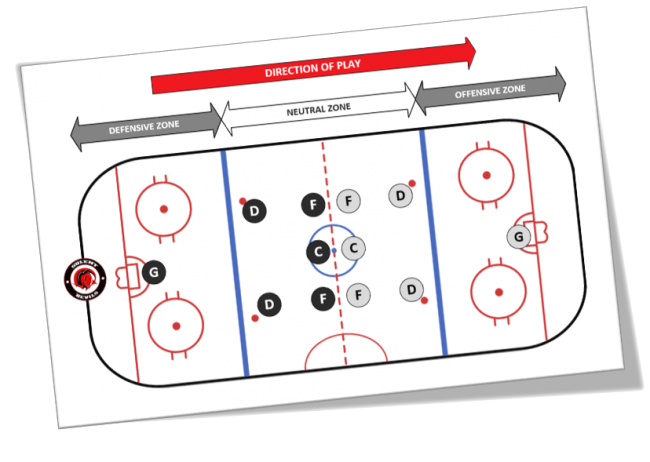 There can only be a maximum of 6 Players on Ice for each team at a time, 1 Goalie and 5 Skaters, the 5 Skaters are made up of 2 defence, 2 Forwards and 1 Centre. The Centre person takes the face-offs and has the job of supporting the other 4 players and the goalie.

There is an unlimited number of substitutions, which means the team usually comprises of 2 or 3 Lines of 5 Players and a spare Goalie. Each Line will be on the ice for no less than 45 secs and no more than 90 secs, such is the pace of the game and the effort exerted by the players.

Icing is when the defending team shoots the puck down the ice across 2 red lines (the red centre line and the goal line), without it touching another player. When this occurs the game is stopped and a face-off takes place in the defending teams zone.

A face-off occurs at the start of each period, and every time there is a stoppage in play.

The most common penalty awarded, for incidents such as: hooking, slashing, delay of game, interference, tripping, roughing, boarding, cross checking, charging, holding, high sticking, check from behind, spearing, unsportsmanlike conduct or to many men on the ice.

Any minor penalty that draws blood from the cause of the penalty.

Such as fighting, charging, hit from behind, and hit to the head. The player must stay in the penalty box for the entire 5 minutes, even if their short-handed team is scored upon.

Issued for fighting, charging, hit from behind, unsportsmanlike conduct, and hit to the head.

The player must stay in the penalty box for the entire 10 minutes, even if their short-handed team is scored upon.

Includes charging, hit from behind, spearing, unsportsmanlike conduct, hit to the head.

The player is suspended for the remainder of the game and depending on the severity of the penalty, will receive additional suspension by the EIHA.

A penalty shot is rewarded to the offensive player when a breakaway and the defending obstructs the player enough so they do not get a shot off. On a penalty shot, the shooter starts from centre ice and is only allowed one shot, even if there is a rebound.

The Solent Devils are delighted to announce the signing of British forward Liam Coleman.

Ready for the first of the new faces...back here at six this evening. https://t.co/IDiqCnYEaJ
View on Twitter