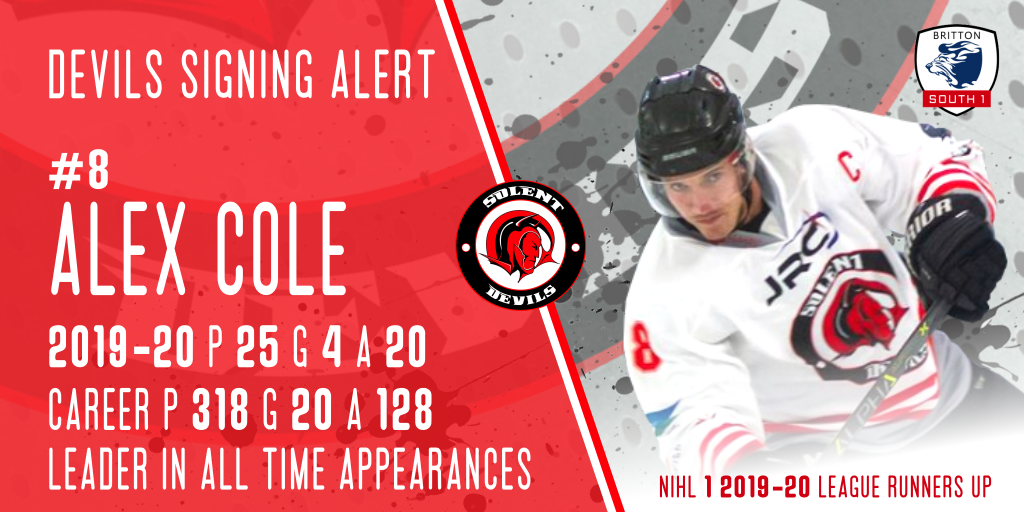 Tonight, the Solent Devils are overjoyed to announce the re-signing of dedicated defenceman, and long-time captain, Alex Cole.

“I’m delighted to be able to welcome back our club captain for next season,” says Devils head coach, Alex Murray.  “Alex is a well-respected member of the team, who I lean on a lot for off ice duties, including fitness programmes and support for interactions with our fans.  Alex has been with me from the start, so he is one of my senior wing men within the organisation.”

Cole, as the longest serving Devil with 318 games, has contributed 20 goals and 128 assists in his eleven seasons at Solent, and has been with the team since before they became ENL 2 champions during the 2011/12 season.  When asked why he has returned to the Solent line up, Cole says,

“It’s the journey that brings me back, I remember only a few years ago, stepping up to the NIHL 1 and being smashed every game, we were lucky if we won four games in the season!  Now look at last season, no one’s playing for the money, they’re playing because we want to be there.  Competing for top spot last season against teams with huge wage bills, that’s what keeps me coming back.”

With 4 goals and 20 assists in the shortened 2019/20 season, Cole continues talking about the amazing season the Solent Devils had over the last year.

“Last season was great, we overcame so many hurdles.  The team had just about two lines at one stage and carried our unbeaten run for several games.  The aim at the start of the season was mid-table, if you look at the line-ups and structures in the league last season, I would have said that was a good point to aim for.  Quickly, we proved that it doesn’t always matter who’s on the ice, it’s who wants to be there and who can perform when it’s most vital.”

As captain of one of the smallest teams in the country, and with virtually no budget, Cole continues to talk about how rewarding it is, and how much the fans mean to both the team, and him personally.

“We’ve never been blessed with a big squad, but we always work with what we have.  I don’t like an easy path, I prefer to work for it as it seems much more rewarding, and I think the fans respect that.  We have a lot of support and get a good following to our away games, which definitely doesn’t go unnoticed.  Without the fans, we wouldn’t be here, they are as vital to the game as we are.  The supporters are fantastic, I personally have bonded with so many of them, their families and their kids.  It’s so great to see them after the games at the Sailmaker so we can get to know the fans and not just see them through the glass.”

It was Murray who made Cole captain, back at the start of the 2015/16 season, after pinning an “A” to his chest the year before.  This doesn’t seem to be anything that Murray has had any reason to question or raised any doubts in his mind, as he says,

“Alex is a leader for this club, simply because he is as committed and passionate about it as me.  You need your captain to be loyal and lead by example, Alex does both of these things, on and off the ice.”

“Every season I set myself goals, I work and train in the summer to adjust any areas or improve on weaker ones.  I was notoriously a stay at home defenceman, two years ago I went about trying to change that and to impact the team going forward, not just going back.  My target was to match last seasons points in a tougher and stronger league, and be more patient defensively in our end.”

In the season before last, Cole was the NIHL 2 leading defenceman for both assists and points – this in the season after Cole captained the team to a playoff championship,

“I’m sure I managed 33 points in 2018/19, so I was on target with 11 games left to get another 9 points last season, and I have become much more confident with play-making.  The importance of winning is key, my personal points of course contribute towards results, as do everyone else’s, so I am extremely happy with a point a game.”

These goals and targets, and the increase in confidence from Cole don’t go unnoticed by the ever-diligent Murray,

“Alex always likes to set himself targets and goals each season.  Off the ice, he is very humble and always wanting to improve.  I’ve been impressed with his offensive contributions recently, but more so how he has begun to be so effective in his decision making during the big games and in the big moments.  I was very pleased with Alex’s contribution last season, he often plays with our second forward unit, so contributing on the board has helped the team overall.”

As thoughts turn to the future, Cole goes on to say,

“Next season we have to push for the top spot, I know everyone else will be looking for that and I’m sure other clubs will be aware of that.  With that in mind, we have to remember that no clubs will be unprepared and we wont catch them snoozing, it will be a very tough grind but if we can pull it off then what a feeling that will be!  A personal goal of mine will be to be more clinical with shooting and have more confidence and patience in the offensive zone – I can’t wait to get started again.”

Murray concludes simply, and with confidence in his captain,

“Next season is a complete unknown, I know Alex will be ready regardless and I will be looking for him to start the new season just like he did the last, as we look to hit the ground running.”

Cole will return to the Devils in shirt #8.  If you would like to sponsor a Devil, or find out about becoming a team sponsor, contact devilssupporters@outlook.com.