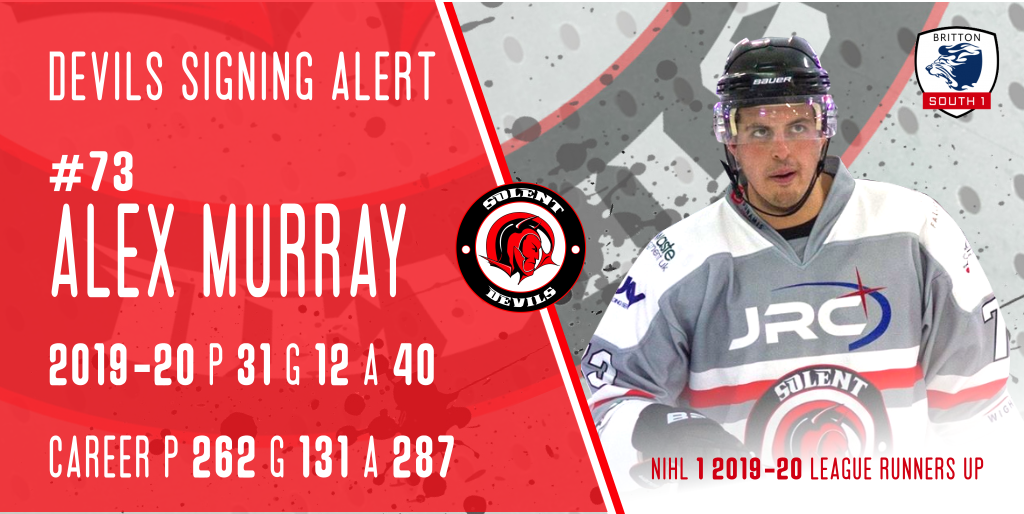 Tonight, the Solent Devils are delighted to announce the re-signing of head coach and versatile player, Alex Murray.

“It is great to have Alex in charge again next season,” says Steve Ferguson, Devils general manager, “he is passionate about not only the game and the team, but about creating an exhilarating and memorable experience for the supporters, his clarity of vision makes it easy and enjoyable to be a part of the off-ice team.”

Murray returns for his eleventh season at Solent, where he has played 262 games, scored 131 goals and contributed with 287 assists,

“The Devils is my home, I have spent the majority of my life at this club, playing since the age of 3 and coaching since I was 13 years old.”

Since returning to the Devils in 2013, Murray has coached the Devils up the table through NIHL 1, battled for supremacy in NIHL 2, won a playoff championship and took the Devils back to the final the following year, and then saw them claim second in NIHL 1 at the end of last season.

“It’s a no brainer to continue the journey I am on,” Murray states, “I want to establish this club as one of the most efficient in the south of England.”

With the Devils being a small club with a budget limited by several factors such as the capacity at their home games, the Devils face many challenges, but Murray seems to relish the task in front of him,

“It’s a great challenge, one I enjoy thoroughly! What it does show is that you don’t need a big budget to be competitive at this level.  I am humbled to have a team of players who I call family, as well as a wonderful back room team and of course, our fans who make all of this a success!  I could not be as successful as I am today without the help of everyone.”

Solent Devils may be a small club, hampered by the capacity of the ice rink they play in, but their army of fans are dedicated to the Devils, many of whom travel to away games and have been known to outnumber their opponents fans in their own rinks.  Murray is always grateful for the support for the team, and the team of volunteers that help run the Devils home games,

“The fanbase has grown considerably over the past couple of years.  I feel the time we spend after games with the supporters is invaluable.  In turn, the support we get back is amazing.  The players really enjoy playing at home, it’s all down to the support we receive, in particular from our wonderful supporters club!”

While Murray prefers playing forward, last season due to injuries or player unavailability, the versatile and solid player skated many games in defence.  Ferguson simply comments,

“Alex is a master of reading the game dynamics, his influence on the ice ensures that players remain focused on the outcome of the game and not lost in the moment that can cost you a game.”

Murray contributed twelve goals and forty assists in the 2019/20 season – 31 games – while only sitting 24 penalty minutes, but when asked to reflect, modestly says

“It is difficult to judge your own performance, however, I am constantly asking for feedback from my coaching team and senior players.  Over the last few years, my dad would also provide feedback, which is one thing I am missing at present.  The transition back to defence has been a blessing in disguise, I can help control the game from the back, as well as see the game better, meaning my coaching is more effective.”

As thoughts turn towards the future, Ferguson says,

“I’m expecting Alex and the team to continue to demonstrate the determination and talent that silenced that silenced their many critics, next season is 2019/20 part 2 – unfinished business.”

“It’s a real shame last season was cut short,” says Murray, “I completely understand and agree with the reasons.  Last season was one of the best seasons I have been a part of, to go unbeaten at the start of the season for so long was amazing, as was competing with all the teams with budgets, I am very proud of what the team accomplished.”

There is still a lot of summer ahead of us though, and before thoughts of the new season and what is to come carry everyone away, Murray goes on to say

“The upcoming season is a complete unknown, so, for now, I will continue to recruit the strongest team as possible, assessing our position and goals closer to the time, when we know what the season and the other teams look like.”

Murray will return to the Devils in shirt #73.  If you would like to sponsor a Devil or become a team sponsor, contact devilssupporters@outlook.com.