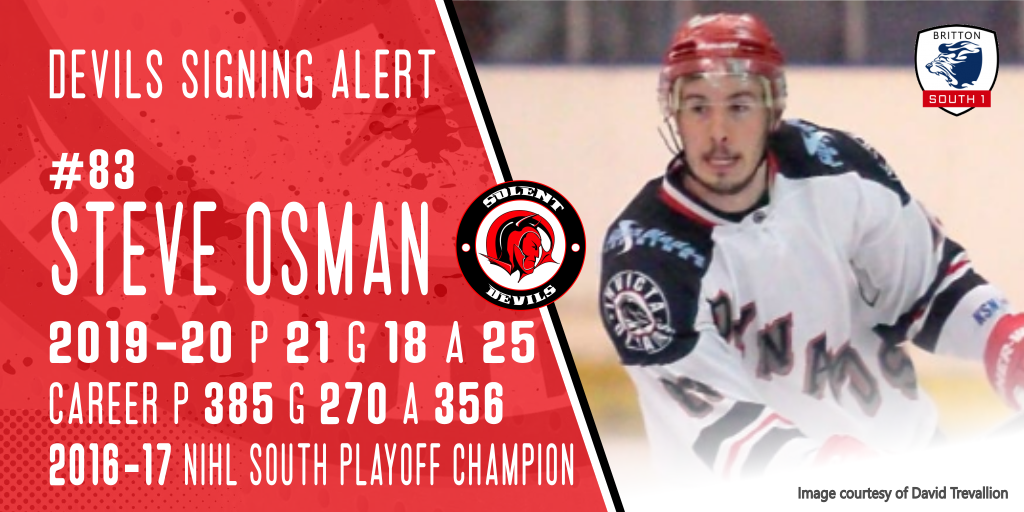 Today, the Solent Devils are delighted to announce the signing of British forward, Steve Osman.

Osman transfers into the Devils from the Bracknell Hornets, where in the 21 games he has played in the 2019/20 season, he scored 18 goals and contributed with 25 assists.

“Ozzy is someone I have known for a very long time,” says Alex Murray, Devils head coach.  “We have often talked about him coming to Solent, but work and distance has always meant it never quite happened.  Steve is a proven goal scorer at this level, who will add depth to our forwards – in particular at centre – which we have been short on since I dropped back to defence.”

“I’m very excited to be signing for the Devils,” says Osman, “you have a great squad here, they are a great bunch of guys who battle hard every game and are reaping the benefits of all the hard work and dedication Alex and the boys put in.”

Osman started his senior hockey career at Swindon, with the Swindon Cougars and is a familiar name around the South leagues, he knows many of the Devils too, having played with Richard Facey, Kieran Annis and Alex Trendall during his time at Wightlink Raiders, so his familiarity with some of the players will be beneficial when joining Solent.

“Ozzy will be expected to get up to speed with the Solent way pretty quickly, as we look to keep pace with the teams at the top of the league,” says Murray.  “We all know about Ozzy offensively, but I will also be looking for him to lead his line at both ends of the ice, he is also great on faceoffs, which will be another benefit.”

Over the course of his career, Osman has played for several teams, including the Bracknell Bees, Basingstoke Bison and Cardiff Devils. The 32 year old has played an astounding 385 games with 270 goals and 356 assists.

“I feel like I will bring some additional scoring to the team, and I am hoping to add to an already talented scoring group,”

Osman replied when asked what his aims are for the rest of the season.

“I will also help out by, hopefully, being a good two-way centre.”

Murray then goes on to say

“Ozzy gives us more options through the middle of the ice but can also play the wing.  Once he is settled into the team, I have some tough decisions to make in terms of line ups, that said it gives us better depth and will mean players will have to fight for their places on the roster.”

Despite the fact Osman is joining an established team quite a way into the season, he is very upbeat about it and seems to have no real worries about heading into the Solent organisation.

“I am really looking forward to playing in front of all the loud and supportive fans at Solent, and can’t wait to get on the ice very soon!”

Osman will be playing in shirt #83.  If you are interested in sponsoring any of the Devils this year, contact devilssupporters@outlook.com