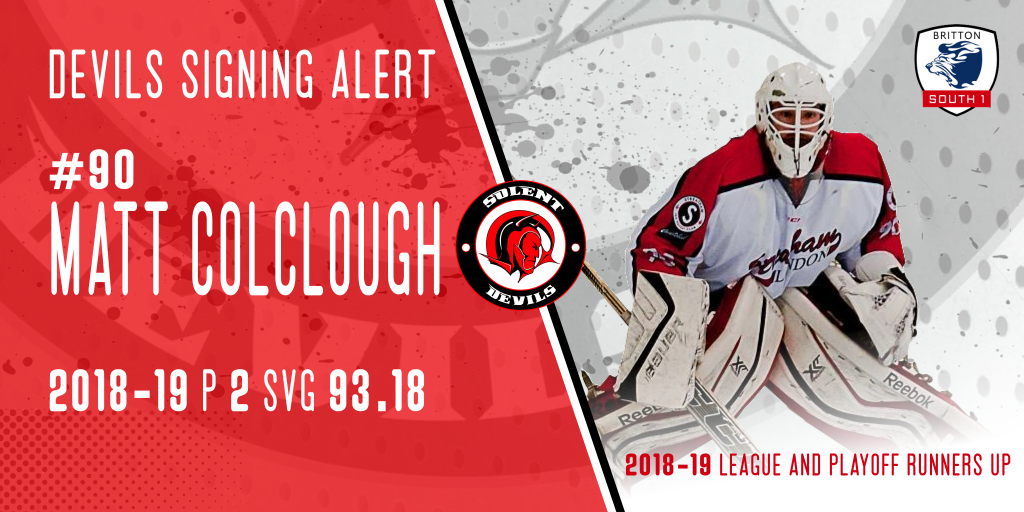 Today, the Solent Devils are pleased to announce Matt Colclough will be back in the squad for the 2019/20 season.

Colclough will primarily be training with the Devils, to keep the rest of the team – and the other netminders – sharp.

“I’m really happy to be returning to the Devils,” Colclough says, “it’s a great set up and I have played with several of the team for many years now.  The current set up works for both the team and me, I train every week and will assist on game days if one of the goalies are injured.  I enjoyed the games I played last season, and training was high intensity, which I like.”

“Matty is a great netminder with a wealth of experience,” says Devils head coach, Alex Murray, “he adds so much value to our squad.  His presence on the rink gives our players that extra edge and he will regularly give feedback to players and goalies.”

Colclough played two games for the Devils last season, giving up just three goals from 44 shots.  The 29 year old has been playing since youth, and in his time has played for teams including Guildford Phoenix, Streatham and Wightlink Raiders, winning league titles and playoff championships.

“I’m very lucky to be able to have three exceptional goal tenders at Solent, each one brings something different to the team, Matty has played for many years at this level and won everything there is to win, his experience is invaluable.  Matty will play if and when required, with the additional fixtures this season who knows what ill happen, but for now he will only be training with the team.”

Colclough, obviously happy with the arrangement goes on to say,

“I think I give the team an opportunity to compete in every training, as I I’m not playing on the weekends I will work really hard in training, which helps the players develop their shooting skills continuously.”

This leads on to what Murray is looking for from the veteran, and how he can best use the wealth of knowledge and experience he has, as well as Colclough’s skill and talent.

“Matt knows what is expected of him,” Murray says, “at training he is able to give it his all, as he won’t be playing on the weekend often, that means players don’t get a night off and never get complacent.  He is one of the best goalies at this level, and so if players are successful in training, they should be more confident in games.  I will want Matty to pass his knowledge on to Aaron who is still young, and be a sounding board for Chico, should he need it.”

“Aaron was a young netminder on the Island when I played for the Raiders,” says Colclough, “he was often invited to train with us, and like then I will be happy to pass on any advice should he need it.  With Chico, he is an experienced goalie, so it’s more about helping him stay on top of his game by working hard myself in training.”