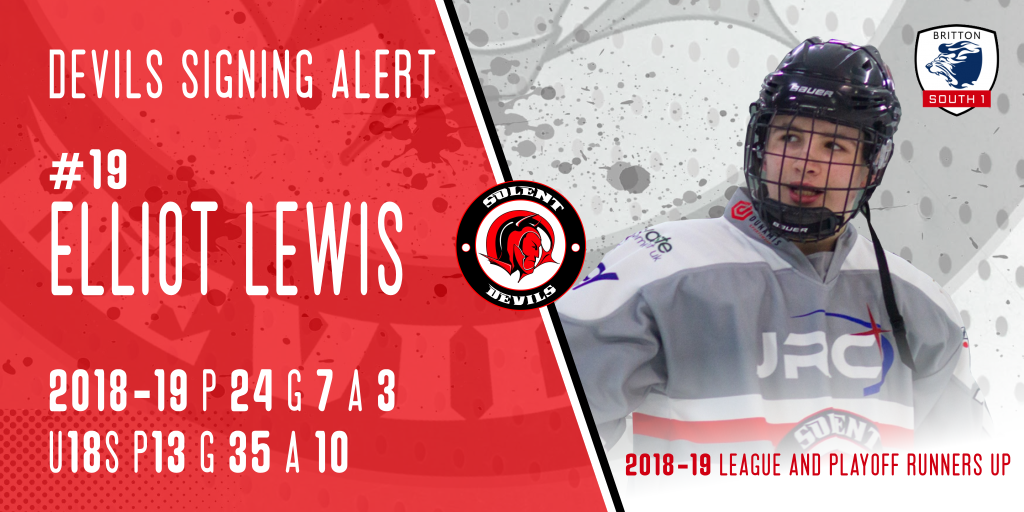 The Solent Devils are pleased to announce the re-signing of Elliot Lewis.

This will be Lewis’ second year with the Devils, after playing on a two-way contract with the junior Devils last season.

“I could name so many things that brought me back to the club this year,” says Lewis, “but if I had to narrow it down to a few things it would have to be how much I have developed as an individual, not only as a hockey player but as a person also, and how great the team ethos is.  Over the past year, I believe that I’ve not really appreciated or realised how much my hockey brain has improved, in terms of positioning and decision making on the ice, and I think that’s all purely down to being in and around so many years of experience with the other players and especially the coaches.  The changing room on training and game days is really something else, it is a great chemistry and bond between everyone, and I think that’s why the team is so successful and gets results, let’s hope we can do it again this year!”

“Elliot is an incredibly talented young British forward, who has huge potential.  I am excited to see how he continues his development next season.”

For the senior Devils last season, Lewis played 24 games, picking up 7 goals and three assists.  When asked about his contribution to the team, he goes on to say

“Overall I am happy with my performances last season, but then again there are a few things, when I reflect, I would have changed.  I think one of the main things that I really struggled with was making that transition from junior to senior hockey, it took me until around Christmas to really adapt to the speed and physicality of the game at that level, and how I had to adapt my style of play.  My last year at junior level, I relied on hand skills to beat defenders, and it built into habit.  Last season, at senior level, whenever I tried to be fancy, I was never successful, so in order to improve that next season, I think I need to simplify my game as a whole.”

Highlighting the difference in performance between the junior and senior level, Lewis played 13 games with the junior side last season, where he amassed an impressive 35 goals with 10 assists.

“Elliot progressed as we anticipated last season,” says Murray, talking about the development of eighteen-year-old, “he has a great willingness to learn and is very humble.”

Continuing to be humble, Lewis carries on his exposition of his development last season, talking about the people that helped him to build his confidence and skills.

“I think the way I developed last year was just constantly watching and asking questions to the experienced players.  Those players were a massive part of my development, they were so supportive when I came to them for advice, or they would offer me little tips and pointers throughout the year.  As a new player, that is all you can ask for and I will be forever grateful.”

“Elliot will be given an opportunity to prove himself at a higher level than last season,” states Murray, as thoughts turn toward the fast approaching first fixture of the 2019/20 season, “and I believe he is up for the test.  He has been working hard during the summer and will be ready to hit the ground running.”

“My goal for this year is just to play smart and simple hockey.  If I get some points along the way, that would be a bonus.  I think I am the least experienced person playing at NIHL 1 level, but I think the squad for this season is very talented and skillful.  On our day, we can challenge anyone so I think that if we play the hockey that we know we are capable of, then who says we can’t be challengers for the league title?”

Lewis will be returning in shirt #19 next season.  If you are interested in sponsoring a Devils shirt, or becoming a club sponsor, please contact devilssupporters@outlook.com.