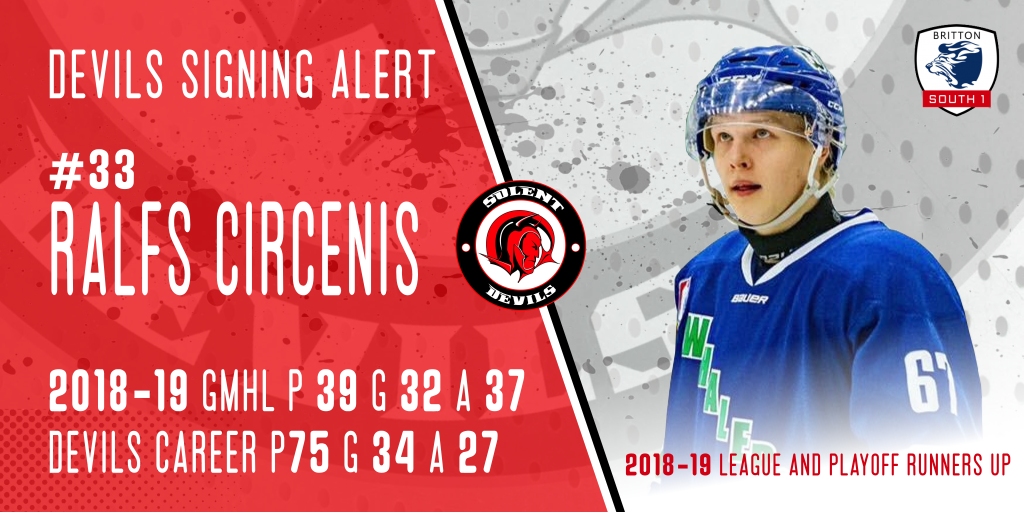 Today, the Solent Devils are delighted to announce the return of Ralfs Circenis.

The 21 year old, Latvian born forward last played for the Devils in the 2015/16 season, and since spent time playing in the GMHL, Canada.

“I’m excited to get started,”

said Circenis, talking about his return to Solent.  The last season played at Solent, Circenis earned 10 goals and 9 assists in 33 games.

“Hopefully I will pick up where I left off.”

Devils head coach, Alex Murray, obviously pleased at the return of the agile forward goes on to say

“Ralfs is an exceptional talent at this level, so I am delighted to be able to secure his signature for the up and coming season.  Having him will add offensive depth to our team.”

Circenis discusses his relationship with head coach, Murray, and why it was a key factor in his return to Solent,

“Alex is a great coach, I like the style of play his team have played in the past and he is also a good friend of mine, having him as the coach here definitely impacted my decision to return.”

Circenis’ time in Canada saw him playing for teams such as Toronto Attack and Niagara Whalers – with whom he won the GMHL championship in the 2016/17 season, and then in the 2017/18 season won the championship again with the Almaguin Spartans.

“Playing in Canada has definitely made me better all round,” says Circenis, “especially in the mental aspects of the game.  Winning back to back championships has taught me what a team needs to win trophies.”

“Ralfs experiences over in Canada will bring a different edge to our offence, he will bring goal scoring as well as a different aspect to our powerplays.”

“My goal this year,” Circenis confidently states, “is to help the team win a trophy at the end of the season, and I will do this anyway I can.”

Murray, however, has some clearer and more game based objectives for the Devils most recent signing.

“Ralfs will be expected to make an impact in the offensive zone, that said he is also a hardworking two-way player, so will help in our end also.  I’m excited to see Ralfs back at Solent.”

Circenis is looking for a shirt sponsor for the upcoming season.  If you are interested in sponsoring a Devils shirt, or becoming a club sponsor, please contact devilssupporters@outlook.com.