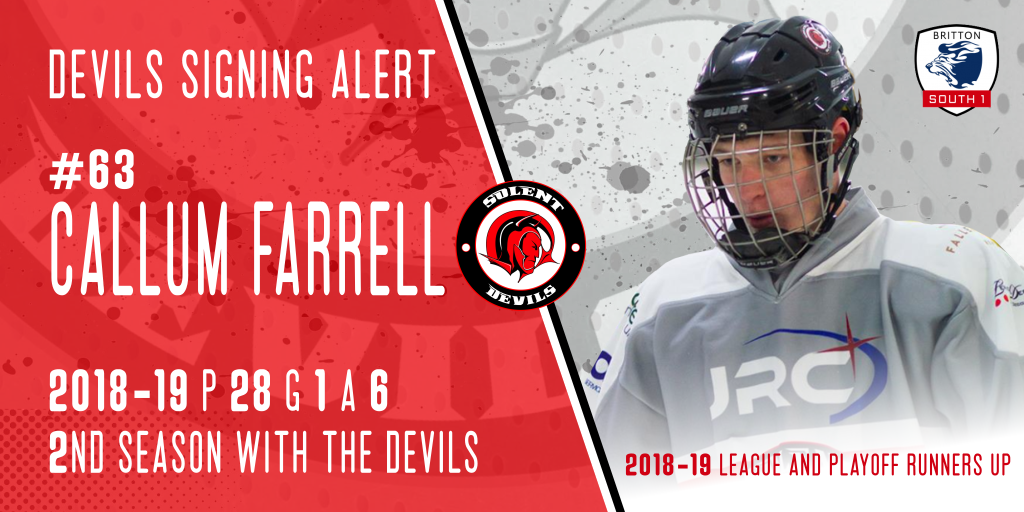 The Solent Devils are today pleased to announce the return of youth player, Callum Farrell.  Farrell will be on a two-way contract with Solent Devils NIHL 2.

“I’ve come back because last season was a fantastic season,” says Farrell, “and I really like the set up at Solent.”

At 18, Farrell is youthful and full of energy, something that Devils head coach, Alex Murray, is perfectly happy working with, always referring to the Devils as a development club.

“Callum has a lot of potential, and the opportunity to train and play at NIHL 1 level next season will only enhance his development.  Callum is continually learning about what it takes to be a senior hockey player at Solent.  Last season he adapted well, worked hard, and took his chances on the ice when they came.”

“Last season for me, performance-wise was a good solid foundation for seniors,”

says Farrell, recognising the opportunity he has, skating with such a dedicated group of players and coaches at Solent.

“I learned so much from each of the team, and I was able to move my game forward.”

“This year, Callum will be on a two way between the NIHL 2 and NIHL 1 teams at Solent,” states Murray.  “Callum will have different roles within each team, but for the senior Devils it is a similar role to last season, he will be continually learning and getting his chance to prove himself on the ice, and I look forward to watching Callum progress further.”

As thoughts turn toward the upcoming season, with the restructured league, Farrell says

“I think it will be a good challenge for the team, and feel we are ready for the new season.  This year, I want to improve my game and be able to put in to practice all of the hard work from over the summer.”

Farrell is returning in shirt #63 for the upcoming season.  If you are interested in sponsoring a Devils shirt, or becoming a club sponsor, please contact devilssupporters@outlook.com.