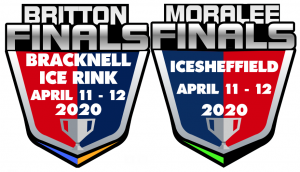 DIVISION 1 PLAYOFF FINALS WEEKEND VENUES CONFIRMED
The National League Management Group are pleased to confirm the venues for the end of season Finals Weekends for the Division 1 competitions in North and South.
The Moralee (North) and Britton (South) finals will take place over the weekend of April 11-12, 2020.  Each event will feature two semi finals on the Saturday with the Grand Final on the Sunday.
Ice Sheffield will host the finale for the Moralee division.  The twin pad venue has hosted joint Moralee-Laidler weekends previously in the main Bauer Arena, as well as being an EIHA centre of excellence and the home of the JLMC Conference Weekend.
General Manager at Ice Sheffield, Shaun Lough, said: “We are looking forward to hosting the event taking place in the Bauer Arena.
“It adds to our ever growing portfolio of ice sporting events that take place at the venue year round.
“It is great news for the city and provide local ice hockey fans with even more ice hockey to come and watch.”
For the Britton division, Bracknell Ice Rink will be the host venue.  A successful host for the Wilkinson (S2) finals in each of the past two seasons, ’The Hive’ has stepped up to take on the challenge of the South Division 1 weekend.
Justin Wilson, Ice Rink Operations Manager at Bracknell, said: “Firstly I’d like to start with how pleased I am we’ve been chosen to host our third consecutive finals weekend.
“We would certainly suggest the events have improved over the last two years both organisationally and value for money with the quality of talent on display.

“This year fans will enjoy our further improved facilities, with speakers now installed downstairs rink side and a new and improved Bees Knees bar.

“I’m looking forward to seeing the top teams of the league battling it out over two days, and seeing a variety of fans packing out the arena.”

The Bracknell event has partnered with the four-star Coppid Beech Hotel beside the rink and they are offering those attending the Britton Finals a discount for their rooms on Saturday 11th & Sunday 12th April 2020. The Coppid Beech Hotel also have 2 accessible bedrooms that have extra space for easy wheelchair access.

NIHL league manager Gary Dent said: “The NLMG are grateful to all venues who expressed an interest in our divisional finals weekends, and we’re delighted to work with Ice Sheffield and Bracknell Ice Rink again and look forward to two well run events which can act as a worthy showpiece for the supporters across the respective divisions to bring the curtain down on their season.”
Final schedules and ticket prices for the weekends will be confirmed in due course.
The venues for Division 2 North (Laidler) and South (Wilkinson) will be announced in the next couple of days.
ENDS