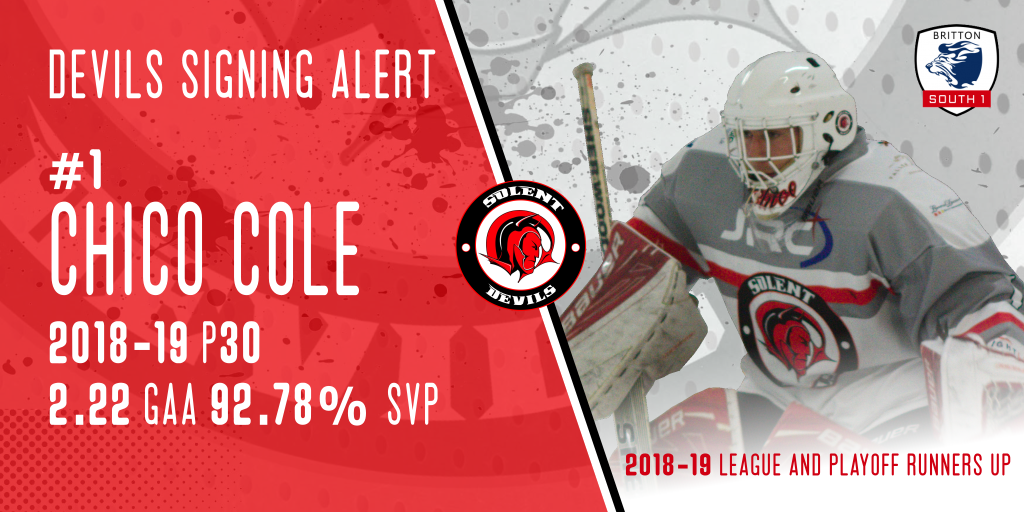 Today, the Solent Devils are delighted to announce the re-signing of the lead netminder, and number 1, Christian “Chico” Cole.

“I’m proud to be a part of the Devils organisation,” Says Cole.  “It’s been a pleasure to see this club being transformed into something very positive, with players wanting to play at the club.  One of the reasons I am back is because Solent’s dressing room is like no other!  The fans are another reason I am back, it is a real great feeling and an honour to see our arena full of fans.”

“Chico is an integral part of the core squad at Solent and has been for several years.  He brings confidence to the team and will once again be one of the top goalies in the league.”

“I’m more relaxed than ever, this being my twenty-second or twenty-third season playing hockey across all ages, I just love to play the game and I’m still learning all the time.  My performances are also improving and becoming much more consistent, which is the main thing for me and the club.”

Last year – his ninth for the Devils – Cole played 30 games, with a 2.22 goals against average, stopping a huge 92.87% of all shots he faced.  This equates to allowing just 62 goals for the entire season – including the playoffs, while having faced a huge 861.  Cole also picked up 4 assists in the season.

Murray though, has a long history with Cole and has seen what he can achieve on the ice over a period spanning many years.

“Chico has always been a consistently top end goalie.  His stats show that he will keep the team in games and I a rink where goals are easy to come by, as a team we conceded the least amount of goals of the last two seasons compared to the other clubs, and Chico is a big reason for that.”

The new season, with the restructured league brings more games in the fixture list than the last few seasons, but Cole doesn’t seem too worried about it.

“Although I loved less games last year, due to being less demanding on my body, I’ve been here and I’ve done it before, I am ready for it again.  It’s certainly going to be interesting next season.  I don’t really know what to expect, but it’s definitely going to be a big challenge.  It looks like a lot of clubs have strengthened their teams, but we will be there week after week to compete with everyone.”

Murray doesn’t seem worried about the veteran netminder’s fitness either – although lets slip his plans for the upcoming season to ensure that the Devils remain fully competitive in any event.

“Chico will once again be the Devils number one goaltender.  He is an exceptional talent, and I will expect hm to keep us in games to give us a chance to win as many as possible.  Chico will manage the increase in games, although I intend to have two goalies competing with each other this season, which will allow him to rest and recover on some weekends.”

With the pressure on the netminders, when asked about his goals for the season Cole simply says

“This year, I’m going to take it week by week rather than setting myself goals at the start of the season.  We will be there to compete with everyone, and I will be aiming to do my best as always.”

Cole will be returning in shirt #1 for the 2019/20 season.  If you are interested in sponsoring a Devils shirt, or becoming a club sponsor, please contact devilssupporters@outlook.com.