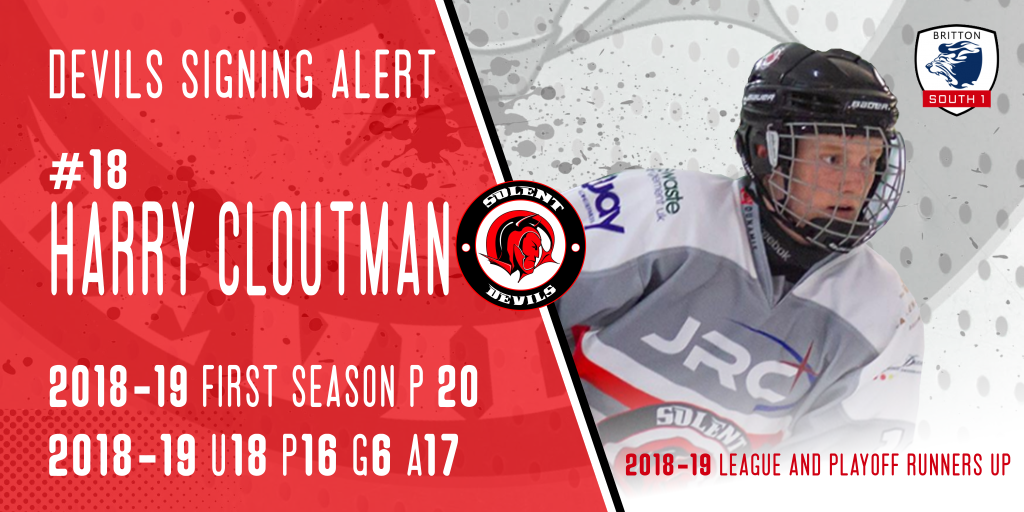 As this young player continues to learn, grow and develop.  This will be the second season with the Devils, as the seventeen year old defender joined the senior club for 20 games last season.

“This is a great place to develop my hockey skills and progress,” says Cloutman, “it is my home.”

“I was really impressed with how Harry settled into the team last season,” says Devils head coach, Alex Murray, “his performances were solid, and he did not let himself or the team down.”

Cloutman goes on to say,

“Last year, when I had the chance, I did the things that I should have – if I didn’t, I was told and then tried to improve from the feedback.”

With Cloutman on a two-way contract, Murray says

“Harry will have the opportunity to continue his development across the 18s, NIHL 2 and the senior Devils in NIHL 1.  Harry will need to be ready when called upon for the Devils and I expect him to adapt well to the new league.”

“Harry is lucky in the sense he has great coaching in all the teams he plays for at Solent,” states Murray.  “Harry knows what he needs to work on to develop his skill set, and I am confident he will continue to improve.”

Looking to next season, the young defender says

“I think the team is going to be competitive with the new league, and I don’t think we are going to do badly.  My goals for next season are to improve my skills both on and off the ice so that I can further myself.”

Murray adds to this by saying,

“We are not planning on having a difficult season.  We are expecting it to be competitive and this will be a true test for our younger players, including Harry!  Only time will tell how harry will do, but we will ensure we have given him every opportunity to be successful”

Cloutman is looking for a shirt sponsor for the upcoming season.  If you are interested in sponsoring a Devils shirt, or becoming a club sponsor, please contact devilssupporters@outlook.com.