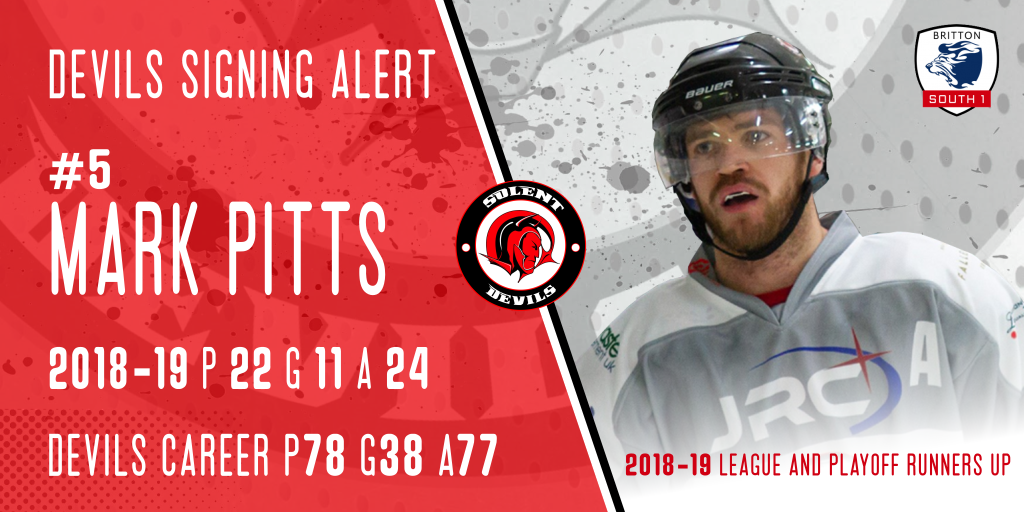 Today, the Solent Devils are delighted to announce the return of Alternate captain, Mark Pitts.

“Mark is a fantastic player and very much respected in our locker room, he is key on the power play, on the penalty kill and in the face off circle.”

This will be Pitts’ fourth season with the Devils, where last year he played 22 games, scoring 11 goals and earning 24 assists.

“Re-signing for Solent this year was a simple decision to make,” says Pitts.  “there has always been a great atmosphere in the dressing room from both the players and off ice team.  It makes Solent a very enjoyable place to play hockey.”

“Mark will be a crucial member of our line up next season,” states Murray, “and as usual will be expected to log big minutes in all the games, as well as be out on the ice during crunch times.”

“There’s no denying that this upcoming season will be a much tougher challenge than last season,” Pitts says.  “As one of the smaller clubs in the league set up, I expect us to have to battle and grind for every point.  It’s definitely a challenge I’m looking forward to.”

“Having spent the first half of the season injured and only coming back properly in the new year, I really struggled to find rhythm and consistency.  This season I’m aiming on finding the consistency in my game that was missing, and hopefully help Solent into a playoff spot in the process.”

“Last season’s injury was unfortunate,” says Murray, “but Mark has overcome the injury and is now back to his best.  Mark will be expected to lead the team at both ends of the rink, he will tally points regardless, but it is his work both on and off the puck, doing jobs that most guys shy away from that are invaluable to the Devils.”

Pitts will be returning in shirt #5 next season.  If you are interested in sponsoring a Devils shirt, or becoming a club sponsor, please contact devilssupporters@outlook.com.