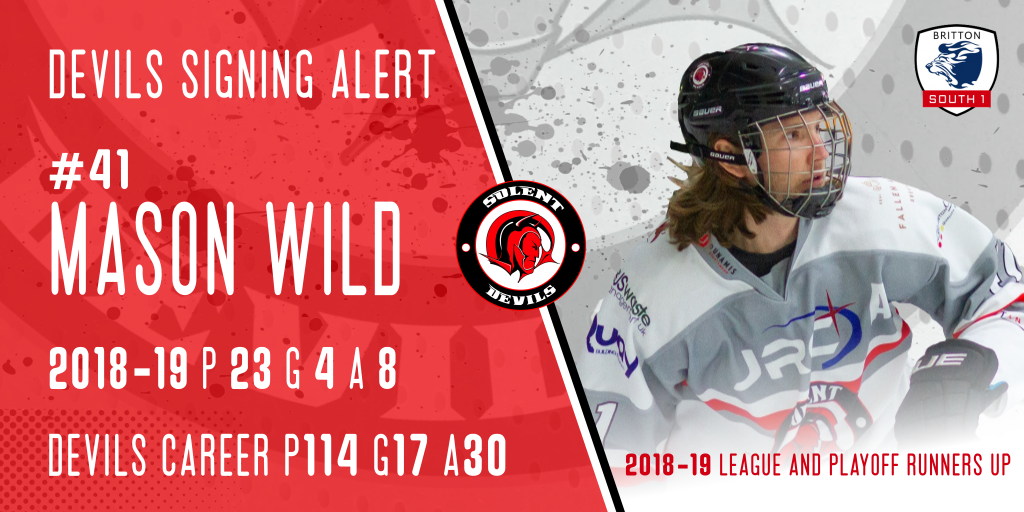 Today, the Solent Devils are delighted to announce the return of Mason Wild.

Wild returns for his sixth season at Solent, where he has spent 114 games as a stalwart defender, but still earning 17 goals and 30 assists.

“I was over the moon that Alex asked me to come back,” said Wild, “I have been here some time now, and it feels like home.  The crowd at Solent really gets behind the team, and there is such camaraderie with the guys I couldn’t imagine being anywhere else.”

“Mason is a highly skilled defenceman,” Alex Murray, Devils head coach, says, “He could make the roster of most – if not all – of the NIHL 1 clubs!  His experience and ability on the puck are two of the main reasons I have brought him back as my alternate captain.”

“Mason is a calming influence on our defensive unit,” continues Murray, “He talks to all of the boys and keeps them focused throughout the game.  I allow him and Alex [Cole] to micromanage the defence, and I feel all of the group respect his views and his abilities.”

One of the quietest players on the team, when asked the key to his success on the ice Wild simply says

“I watch the puck, I watch the players.  I like being in defence, when I am on the ice I can be behind the Devils while they are attacking, contemplating where an attack would come from if the opposition made a breakaway, I try to anticipate that and get in the way.”

Laying out his expectations for the coming season early, Murray says

“Now Mason is fully recovered from the injuries he suffered last season, I will be looking for him to lead the defensive core.  His ability in both ends of the ice will mean he will be called upon regularly, and I expect him to produce points from the back as well as being tight on defence.”

Wild returns in shirt #41 next season.  If you are interested in sponsoring a Devils shirt, or becoming a club sponsor, please contact devilssupporters@outlook.com.