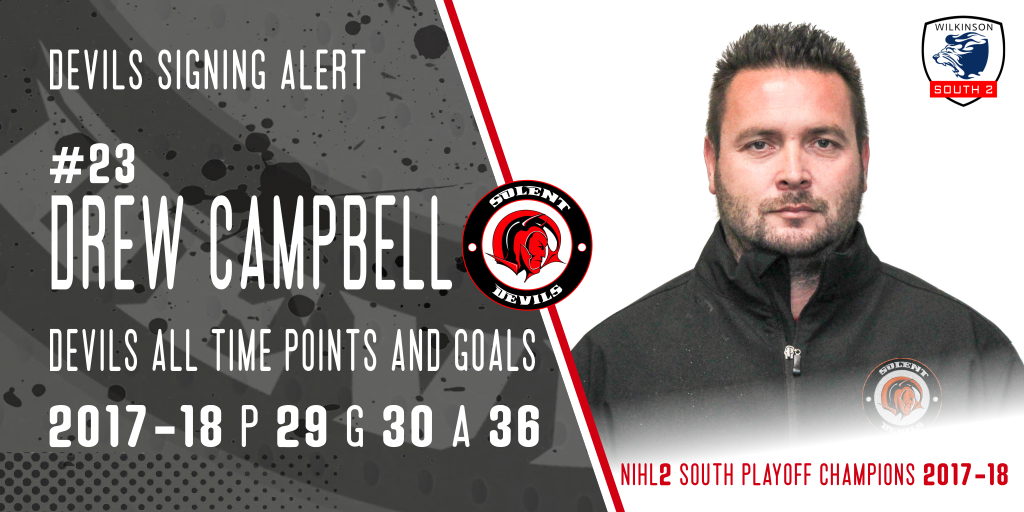 The Solent Devils are very pleased to announce that Drew Campbell is coming out of retirement and will be putting a Devils jersey back on.  Campbell is returning on a temporary basis, to help the Devils due to injuries within the squad.

Campbell holds Devils records for all time points and all time goals, and is behind only Alex Murray in all time assists, as well as being in the league championship squad back in 2012 and the play off winning team from last season – a season where Campbell managed 30 goals and 36 assists in his 29 games.

“The team are carrying some injuries at the moment,”

“some players are still recovering from injuries picked up in the summer, and others following the game against Invicta.  As a result, I felt it vital to bring in some extra depth to ensure we give ourselves the best opportunity at winning every game we play.  Missing out on the league by one point taught me not to take any game for granted, and I’m delighted after speaking briefly with Drew he was happy to return on a short term basis to help the team through our current situation.”

Campbell, when asked what brought him back from retirement says

“I’m back to help the team, even if it is on a temporary basis I would always be here to help the Devils.  Muzza called me and explained the situation, asking if I could come back for at least a while, and even though it might kill me I agreed!”

“I’m really looking forward to being back with the guys,” continues Campbell, “I will be here to help them in whatever way I can, and I look forward to seeing where the season takes us.  The Devils are amazing, they really are a great bunch of guys, and you really miss that when you’re not in the changing room.”

Murray goes on to lay down his expectations for the aging striker,

“Drew understands he will be expected to pick up where he left off last season.  We have games coming thick and fast in October and as a result I will need Drew to hit the ground running.”

Campbell will be returning in shirt #23, to sponsor any of the Devils please contact devilssupporters@outlook.com