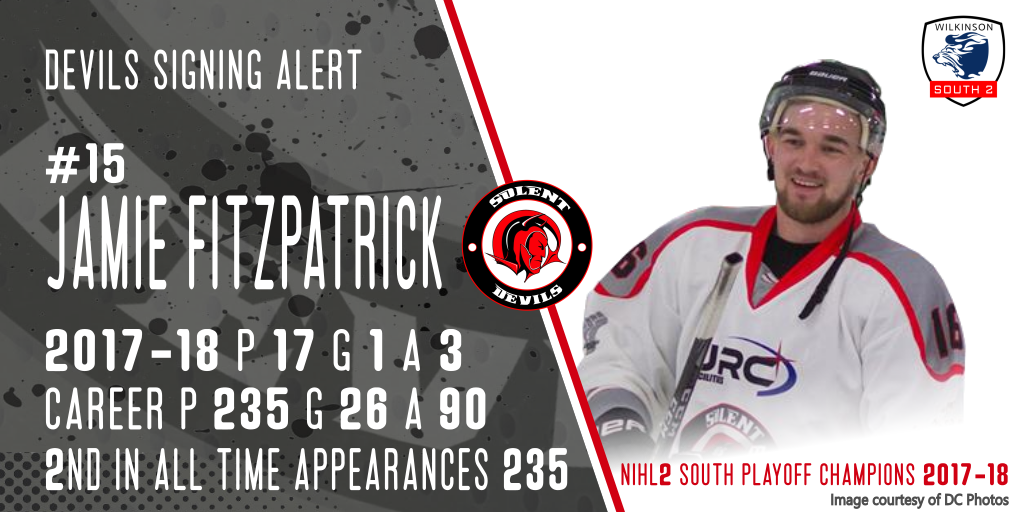 The Solent Devils are delighted to announce the re-signing of long time Devils defender, Jamie Fitzpatrick.

Fitzpatrick has played 235 games as a Devil – his whole senior career – making him second in all time appearance, only beaten by Devils captain, Alex Cole.  This huge stretch with the Devils has seen Fitzpatrick lift the championship trophy twice, in addition to the play-off trophy last season.

Last season Fitzpatrick played 17 games, scoring once and providing three assists.  This takes his total to 26 goals and 90 assists, making him the Devils highest scoring defenceman with 116 points.

“Jamie is someone I have grown up with,” said Devils head coach, Alex Murray, “we’ve played together since juniors, he is a Devil through and through and to be a one club man for so long is a testament to his commitment to our club.  Jamie understands me and the team well, and is a team first guy on the ice.  He is quiet around the changing room but plays with his heart on his sleeve and will do anything to help the team achieve its goals.”

Talking to Fitzpatrick, he makes it clear why he has returned to the Devils,

“Coming back to play for the Devils is always an easy decision, especially with the atmosphere during the game from the crowd and the desire and passion to win from the lads on the ice.  There are no individuals in the team, every player that steps onto the ice plays for the team and each other, which makes it a successful and great team to play for.”

Being a defender with the impressive attacking stats – not to mention his long range shot – Fitzpatrick talks about the difficulties he had pushing forward in the 17/18 season.

“Not being able to train last season made it difficult for me, especially with my attacking decisions, making the correct pass or play in the offensive zone wasn’t my strongest attribute.  Working back in Gosport, I am looking forward to actually being able to attend training and step up my offensive game.”

Murray, however, seems to have no complaints over Fitzpatrick’s performance.

“I am looking for more of the same from Jamie, he is a solid defenceman who can hit, shoot and skate hard.  We have a strong defensive core and I will be looking to Jamie to continue to impress and keep our goals against down.  Jamie is a defenceman first, and while he can play on the wing if required, he will continue to patrol the blue line for us again this year.”

Fitzpatrick had a work commitment for the play-off final, so was missing from the game where the Devils lifted the cup, however, he was there for the semi-final the day before, and he mentions this while talking about his excitement coming in to the new season.

“It was great to be on the ice for the semi final and help the team get the win and into the final.  I was disappointed that I had to leave and head back to Plymouth for work.  We only just missed out on winning the league, and then to win against some of the top teams in the league to get to the play off final and win was a massive achievement.  I am looking forward to actually getting onto the ice for training to improve my game, but mots of all challenging and being in that top spot at the end of the season.”

Fitzpatrick will be returning in jersey #15 sponsored by Gordon Pooley in memoriam.  If you would be interested in sponsoring any of the Devils, or becoming a team sponsor, please contact devilssupporters@outlook.com