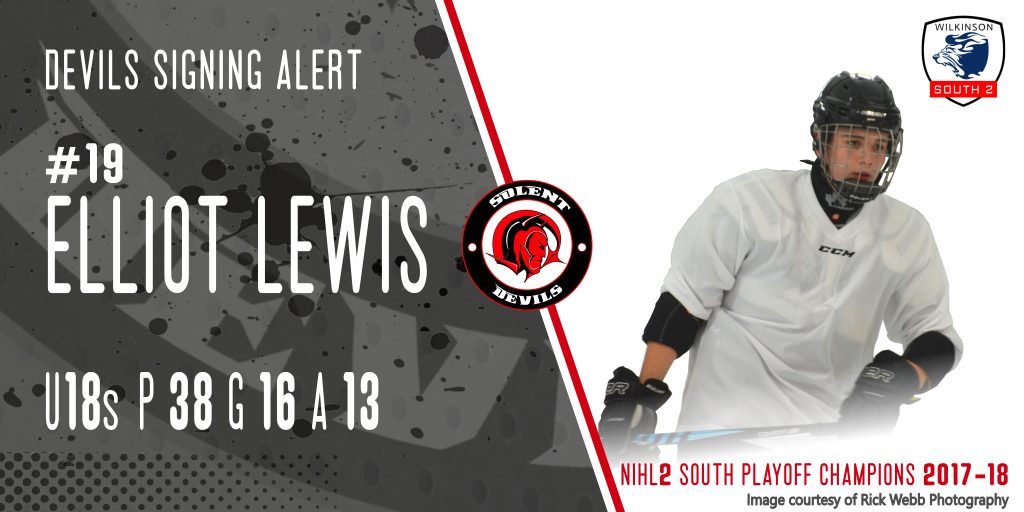 The Solent Devils are delighted to announce that Elliot Lewis is joining the senior men’s team at Gosport, and becoming a Solent Devil in the upcoming 2018/19 season.

“I signed with the Devils, because I felt that it was a brilliant opportunity for me to develop as an ice hockey player, and gain experience under a well respected coaching staff – and players – in the Devils set up,” said Lewis.  “I really feel that I will thrive off these players and coaches, due to their level of knowledge within the sport and I really hope I can mature as a player in the surroundings of the club.  When the opportunity came my way, I wouldn’t turn it down – it was a no brainer!”

“Elliot approached me earlier in the summer and has been skating with the team for a couple of months.  I’ve been really impressed with Elliot’s skill set for someone so young, he reads the game well and works hard.  He was a former Gosport junior and so it’s nice he has returned home to continue his development.”

Talking about what he will bring to the team, Lewis highlights his dedication and commitment,

“My overall goal this year is to bring hard work, determination and overall a positive contribution to the team.  This is my first year as a senior ice hockey player, and at the age of 16, so, therefore as a younger player I want to bring power, speed, and use all my energy.  I’ve got to make sure that I am working my hardest every game for the team, in whatever situation that may be.”

Looking towards Lewis’s development, he already has praise for his new team mates

“Already, I have received a tremendous amount of support, help and guidance from players and coaches in training, which I have already taken on board and feel a better player for it.  Being a young player, it’s a great place for me to be, as I want to learn and develop as a player.  Being within this team, I am constantly going to be picking up and learning new aspects of the game that I wouldn’t have necessarily seen at junior level.  For me to be here, I see it, in a way, as a free hockey school, where I can pose as many questions that I may have to players and coaches in order for me to become a better and more mature player, which is my overall goal for this year.”

Murray, looking to assist in the development of Lewis says

“Elliot will share his time between the Devils and U18s to ensure he is on the ice as much as possible, so he can continue to develop, he will prioritise the Devils when we have games, but the opportunity to play a lead role with the U18s will develop a different side to his game.”

Moving up to the senior environment must be an experience that is filled with emotions, but Lewis is excited for the chance to prove himself and relishes the challenge it will bring

“One thing I am looking forward to, is the fact I am going to be skating and playing on a rink, week after week, where I started playing at the age of 9.  Another thing I am excited for, is to be playing for a team I used to cheer for as a younger child, which is quite surreal in itself, I never imagined playing for the Devils as a child, but now it is a reality and I am very grateful for the chance.”

“Elliot knows he has to work hard to earn a regular spot,” says Murray, “he is keen to learn and is very determined.  I hope when given the opportunity to get some ice time he grabs it with both hands.”

Elliott will wear the #19 jersey and is sponsored by The County Groom Room, if you’re interested in sponsoring a players shirt please contact us at devilssupporters@outlook.com