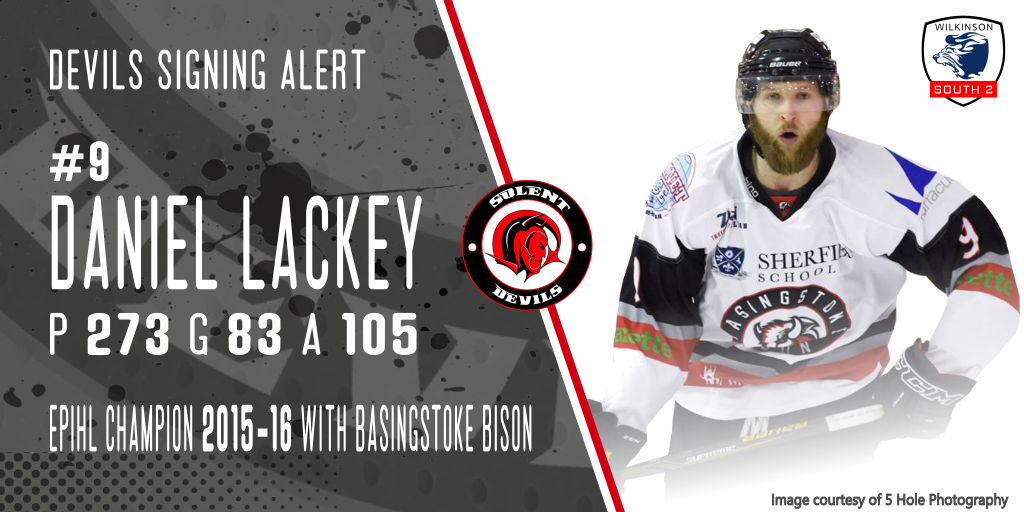 The Solent Devils are pleased to announce the signing of a new Devil, Dan Lackey.

Lackey joins the Devils after a long career at Basingstoke, with 273 games played, scoring 83 goals and with 105 assists, and having been a part of the EPIHL 2015/16 Championship team.

“With the loss of key, experienced players this season, including the retirement of Drew Campbell, I knew I needed to replace a few of them with similar players to ensure I have the right balance of youth and experience.” Said Devils head coach, Alex Murray, “Dan is a player I have known since juniors, I have seen him develop into a very good hockey player from afar, and is someone I speak to most summers to try and convince him to sign at Solent.  I’m delighted I have managed to finally convince him to join us, Dan will help us achieve our goals this season, as well as pass on his knowledge to our younger players.”

“Alex has been speaking to me for a few seasons now, it’s good to know you’re wanted.  His commitment and professionalism to the Solent Devils makes it an appealing club to come to.”

Lackey has been keeping an eye on the Devils over the past few years, and seems impressed by their coach

“I’ve been following the Devils for the last three or four years now, when they took the step to join EIHL 1 and everyone expected them to be defeated every week, but Alex pulled together a squad that surprised most!  The core of that squad is here, and I know a lot of them so that makes this move easier.”

When asked about the move to Devils, and some of his reasons behind it, Lackey simply says

“I like winning and am keen to get my hands on some silverware, Solent are a competitive team and will be looking to pick up where they left off last year with the play-off win.”

This is clearly something on Murray’s mind too, as the 2018/19 season will be bringing many games with increased pressure as the Devils try to improve on their fantastic year last year and the other teams in the league try to prevent them doing so.

“Dan will bring skill, size and a ton of experience to the team, having played for Bison in the EPL for several years.  Dan will be used to big occasions and important games, he will hopefully help us in those situations, but he is also a down to earth guy who the younger players can speak to and gain advice in training, and on game days.”

As a new player to the Devils, Murray will need to find where the versatile Lackey fits in to the team

“You never really know how the line up looks over the summer,” says Murray, “whilst you have an idea of how things will shape up, you never know until pre-season practice.  That said, we are expecting Dan to play as a forward on our top two lines, his versatility gives us options, we need to find the right balance and work out who compliments each other.”

This thinking from Murray, is clearly not new thoughts and looks to continue how Lackey has been playing for the last few years

“All through Juniors I was a defender,” Lackey says, “I made the switch quite late, when I was asked to do a job with Bison in the EPL as a power forward.  My strong stride, physical presence and strength on the puck makes me good in the corners on offence.  I am more than happy to play wherever the boss wants though if it helps the team win.”

When asked about his goals at Solent he answers

“My main focus is just to play at the level I know I can and help the team be successful.  Obviously I’d like to put up as many points as possible, personally, but that’s not the only job.”

Lackey will be wearing shirt number 9, and is currently looking for a shirt sponsor. If you would be interested in sponsoring any of the Devils shirts, or becoming a team sponsor, please contact devilssupporters@outlook.com