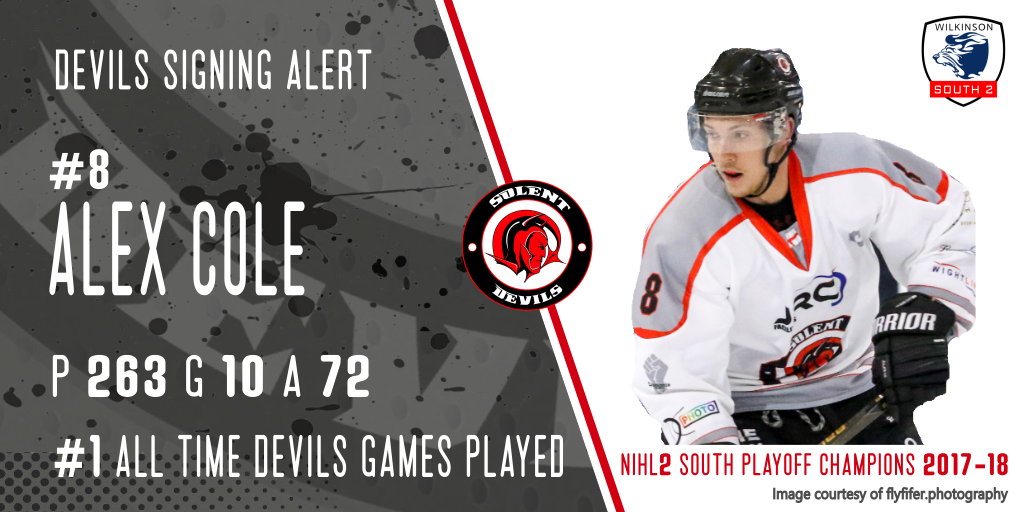 The Solent Devils are please to announce the return of the man who captained the team to Play-off glory, and the spectacular 2017/18 season, Alex Cole.

Cole, the longest serving Devil (263 games), was given the captaincy, back in 2015 under Devils head coach, Alex Murray.  It would seem that Murray values his captain as the two were talking early,

“A few weeks from the end of last season, Alex [Murray] approached me to see my views on next season, which, at that point I hadn’t even thought about the following year as we were hunting the league title and were thinking about the Play-offs!”  Despite the early advances from Murray, Cole was pleased, and continues, “I’m happy where I am and how I have progressed in the club, I’m not one to hold out for a ‘Summer Inbox’ and mess people around, so I was excited and humbled that he had asked me to return and I gave him my promise then!”

Murray was obviously happy too, saying,

“I’m delighted Alex is back for another season with the Devils, he was Coaches Player this past season due to his work rate and commitment to our club.  Not only does Alex show up ready to play each game, but he takes training very seriously, he increases the intensity during practise and the guys respect that a lot.” 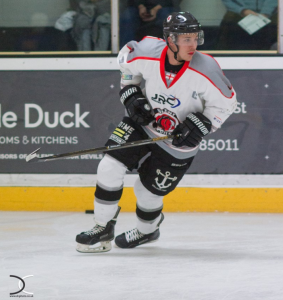 For those that remember the eighteen year old who used to come out on the ice with the Devils, it is difficult to compare him to the confident captain that now pushes the team forward.  Those that speak to Cole may describe him as bold or flamboyant, but when you actually start to question him, you find that he is actually quite inciteful and modest,

“I’m not the biggest voice on the team, and I am still viewed as quite a young captain.  I take every opportunity I can to listen and learn, and the team have come to listen to me when I speak, they respect what I say, even though being captain doesn’t automatically put you on top.”

Murray echoes this by saying

“When I first arrived back at Solent, Alex was somewhat disillusioned with his role and position on the team.  He wasn’t seeing much ice time and there wasn’t any scope for him to develop.  Once I took over the coaching role, I took him under my wing and gave him goals to achieve, and slowly but surely, he turned in to a very talented player.  Given reassurance and motivation, Alex grew into a confident player and the club are seeing the benefits now.”

Last season saw Cole add to his points tally with three goals and fifteen assists (giving him totals of 10g + 15a), and when pushed on these figures he always responds with the same thing

“I’m a stay at home D-man, while it is nice to help out the team when I can, I want to do that at the back by stopping the opposition getting through to the goal.”  When pressed on his personal goals for the upcoming season, he gives little away about his game plan but responds “It’s a bit early to be thinking about that, but 482 days saying I narrowly missed out on the All-Star team is something I personally would love to achieve next season, I’ll continue to work hard this summer, inside and outside the gym in preparation towards that.  I like to set a few personal improvement goals, which I chip away at during the summer, then implement during the season.”

These sentiments are enhanced further by Murray,

“Alex has several roles within our team, he is ultimately responsible for the team, he ensures players are prepared and ready for training and games, as well as leading a fitness programme weekly with the guys.  Alex is someone the boys look up to and someone the majority will aspire to be.  Alex has continued to improve his game and is more confident in the offensive end, and as a result has seen more ice on special teams.  Alex will continue to improve as he is never content, he is always wanting to learn more and that is a great trait to have.”

Continuing to look forward, and talking about the pressure on the Devils in the upcoming season, Cole says 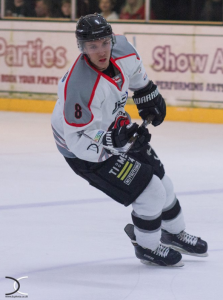 “Personally, I think it’s what you do with the pressure that makes or breaks you, this season, some important times we didn’t use the pressure as momentum to get us the win.  We proved in the play-offs that we had adapted and lifting that trophy is an accolade to the entire team, and the boys hard work, in which I was proud to have been a part.”

As one of the fan favourites, Cole is also quick to recognise the support and often expresses his feelings on it, frequently using his regular spot in the programme know the boost it gives the team, but emphasises the point further by saying,

“This season the crowds and support, home and away, was phenomenal and definitely gave us a buzz, I will be very excited to see that again.  Having the fans behind the team really gives us the motivation to keep pushing.”

Cole will be playing in shirt number 8 again this year, and is currently looking for a shirt sponsor. If you would be interested in sponsoring any of the Devils shirts, or becoming a team sponsor, please contact devilssupporters@outlook.com