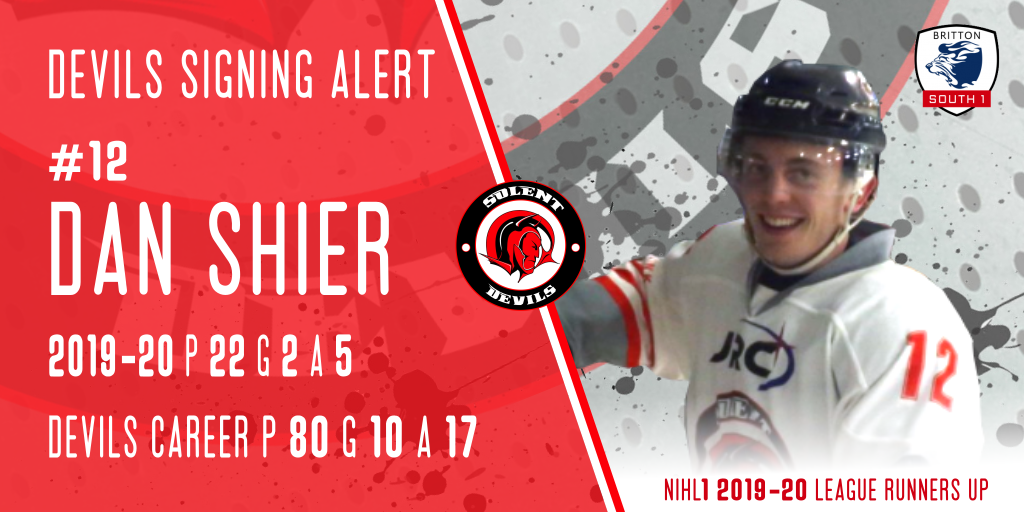 The Solent Devils are pleased to announce the return of British forward, Dan Shier.

Shier has spent four seasons with the Devils, since his transition from the Wightlink Raiders – not including the time Shier spent with the youth team during the 2016/17 season.

“I love the atmosphere in the rink, the boys and the fans,” says Shier.  “Coming back for a fifth season with the Devils was a no-brainer for me, and I can’t wait to get started again.”

“Dan is an exciting young player, with lots of potential and bags of energy when on the ice,” Alex Murray, Solent Devils head coach says of the returning player.  “He is a guy who looks after his teammates, and works hard every shift.”

Over the course of his senior career, Shier has played 102 games, picking up 11 goals and 21 assists – of these numbers, 80 games, 10 goals and 17 of his assists have been for the Solent Devils, as well has having been part of the playoff winning team at the end of the 2017/18 season.  Looking back at last season, Murray comments,

“Dan is a consistent performer, who gives his all in every shift, he works hard in the corners and is a skilful player.”

During the course of last season, Shier scored 2 goals and assisted 5 more during the 22 games he played – this is in addition to the 28 games he played for the Devils team in NIHL league 2, where he contributed a further 4 goals and 6 assists.

“I was playing my best hockey towards the end of last season after having a slow start, so I want to get straight back into it from there,” says Shier.  Looking ahead to the upcoming season, he continues with, “I know there’s going to be a lot more competition for places this year so I intend to work hard to earn my spot. I know I need to step up this season and take every opportunity I am given.”

Murray, pleased by the way the team is shaping up and the options he is presented with when the season eventually starts, says

“With Dan returning, our forward numbers are increasing – which is good for competition.  I will be looking for Dan – and all our forwards – to be consistent and give their all with every given opportunity.  I look forward to continuing to work with Dan for another season.”

Shier returns in shirt #12.  If you would like to sponsor a Devil, or find out about becoming a team sponsor, contact devilssupporters@outlook.com.