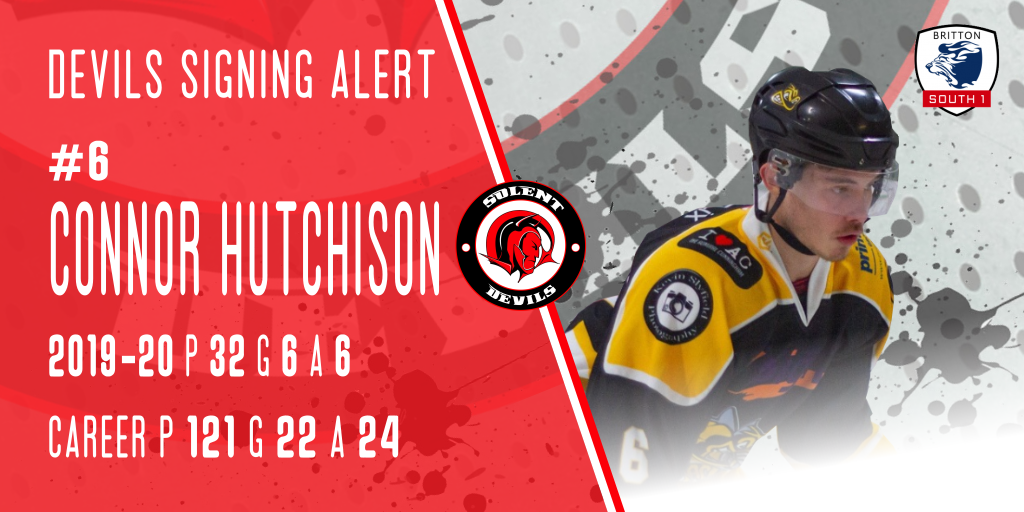 Today, the Solent Devils are delighted to announce the signing of British forward, Connor Hutchison.

Hutchison, formally of the Bracknell Hornets commented about his move to Solent by saying,

“The decision I have made to has come from playing against the Devils. In competition with them, it is always a competitive game, which I really enjoy, and to be part of a team that has done so well in previous seasons is exciting to me.”

“I am pleased to be able to bring Connor to the Devils.  He is young and exciting, but is also an experienced player at this level. Connor will add some grit to our line-up, as well as the potential to put the puck in the net.”

After coming from the youth development in Basingstoke, Hutchison spent a little time in the senior organisation there, and had a period with Milton Keynes Thunder, moving to Bracknell Hornets at the back end of the 2017/18 season.  Over the course of his senior career, Hutchison has played 121 games, where he has amassed 22 goals and 24 assists – 6 goals and 6 assists during the 2019/20 season, where he played 21 games with the Bracknell Hornets.

“I’m looking forward to coming to the Devils,” says Hutchison, “I plan on bringing hard work, and hopefully I will be able to help the boys bring home some trophies!”

“Bringing in young talent like Connor will help supplement the experience we have and help compete for places,” Murray says.  “Connor will fit in nicely to our philosophy and the small rink, where I feel his game will flourish.”

With Murray’s talk of the Devils philosophy, and his desire to have a group of team-first players, Hutchison is already talking like a Devil, as he says

“My aims for the season are to put points up and do what I need for the team.  I’ve got a lot to give and I’m willing to work hard to achieve that.”

Murray finishes with his coach’s hat on, thinking about the development opportunities Hutchison has,

“I’m hoping Connor can be a consistent performer, put up some points and play tough when needed. I’m looking forward to working with Connor to fulfil the potential he has!”

Hutchison joins the Devils in shirt #6.  If you would like to sponsor a Devil, or find out about becoming a team sponsor, contact devilssupporters@outlook.com.