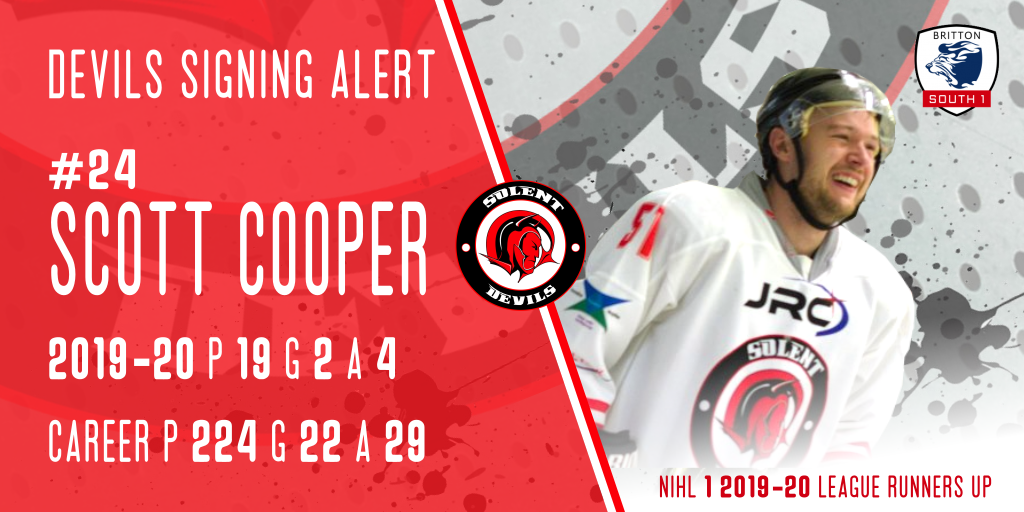 Today, the Solent Devils are delighted to announce the return of British utility player, Scott Cooper.

Cooper returns to the Devils for his second consecutive season, and while he is relatively new to the Southern leagues, Cooper’s senior career began in the 2007/08 season with the Newcastle Vipers.

“It was a very easy decision to re-sign this year,” says Cooper, “I think as a team we have unfinished business, considering we were in the running for the league title this year.  I think most of all, to be able to play in front of the best fans in the league, with your closest friends, every week is what makes Solent great.  There is nothing more you could ask as a player.”

Solent Devils head coach, Alex Murray, is very pleased that Cooper has agreed to return for the upcoming season.

“Scotty was a great acquisition last season,” Murray says, enthusiastically.  “Having moved down south due to work and personal reasons, Scotty had glowing references from his former teams!  Scotty is another team first guy with vast amounts of experience, with the ability to play both forward and defence.”

In the 2019/20 season, Cooper played 19 games, chipping in with 2 goals and helping out with 4 assists, while sitting incredibly few penalty minutes – just 4.  Cooper’s career is now at 224 games, spread across teams in Billingham, Newcastle, Solway, and Slough. In that time, he has scored 22 goals and earned 39 assists.

“I’m always critical of my own game” Cooper says, “but I know my role and it’s not always to put up points, I always try to contribute in other ways such as bringing energy to the line up each night, being that positive team guy and to help the team anyway I can to achieve our goals.”

Murray continues in his enthusiastic talk of Cooper, and what he brings to the team,

“Scotty fitted in perfectly on our third unit with Drew.  He provided depth to our left wing and also the versatility of being able to drop back and play defence.”

During the course of his career, Cooper has been in some big games, and is obviously used to fighting for titles, such has the Devils have been doing for the last few seasons.  Cooper has won his respective leagues twice – once with Newcastle and once with Widnes – and has played in four separate playoff competitions, winning in 2018/19 with the league champions, Widnes Wild.  Looking to the new season, Cooper says,

“I think naturally we have to show ourselves to be a contender for the league title again.  We proved on any given night we can compete with anyone in this league.  Winning will only come with everyone’s contribution and doing our own jobs right every game.  I think consistency will be key, as always, and making sure we turn up with the right attitude and the correct focus for each game.”

“Now Scotty has settled in,” Murray continues, “understands the philosophy of the team and the systems we play, I expect him to really kick in this season.  Scotty will be expected to play more minutes and put up more points, but I know he will thrive on this role and not give anything less than his best for the club.”

Cooper will return to the Devils in shirt #24.  If you would like to sponsor a Devil, or find out about becoming a team sponsor, contact devilssupporters@outlook.com.