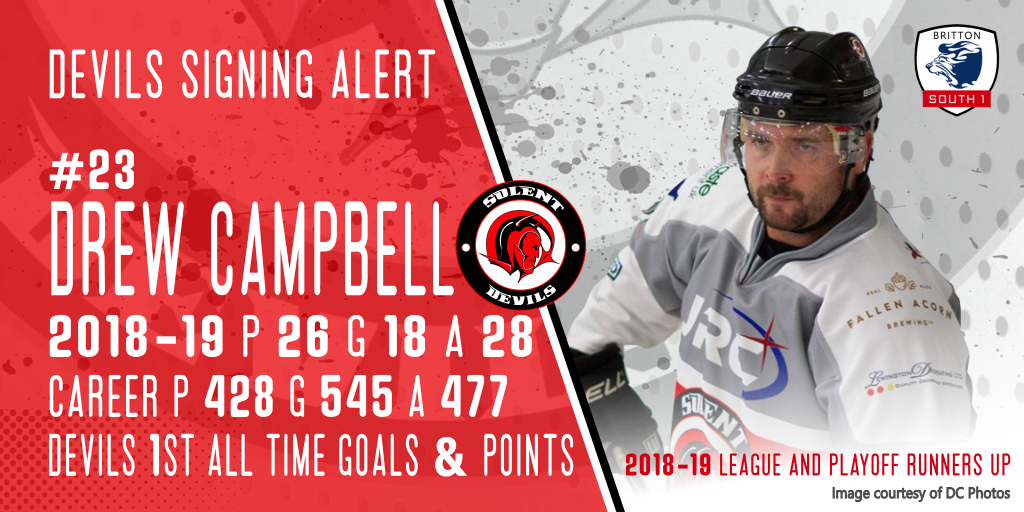 Today, the Solent Devils are pleased to announce the re-signing of Veteran forward, Drew Campbell.

“I love this team,” Campbell says, “I love being here, I love the guys, I love the atmosphere.  I have played with several other teams, and you don’t get the same sense of family anywhere else.  My own son is coming up through the junior programme, so this place really is family to me.”

“I’m delighted Drew has decided to play another season!  Drew has been a wonderful servant to the club and to the sport in England.  His natural ability to score is known across the league, but his knowledge, experience and attitude towards hockey is significant and vital as we enter this new league.”

Campbell’s Devils career sees him appear high in most stat sheets, fifth for all time games, second in all time assists and holding the record for both all time goals and all time assists.  Campbell is the first to say that he is getting older, and talks about the strain on his body.

“It takes longer to get up these days, when I take a hit, it hurts more than it used to, and I have definitely slowed down a lot on the ice.  It seems like the rink is longer than when I first started there, and when we go to one of the bigger rinks, they seem enormous.  You have to learn to compensate though, ten years ago I used speed and strength to get me to the goal, now it is all about puck control and stick handling, guys that I would have breezed past, now I have to negotiate my way around them, keeping the puck and helping the rest of the guys get in to space.”

Murray, too, talks about the aging striker,

“Drew’s role within the team changed last season, as a result of the demands the games were having on his body!  Drew knows his body best and lets me know what he can and can’t do, and I have slowly started to use him more sparingly, on the special teams and when the team need to win face offs.  Last season he provided some stability to our young third line, and I’ll be sure to find a role suitable for Drew again this year.”

“I don’t mind that I am getting older, I don’t mind that I am not as fast as I used to be, I would do anything for this club and this team, if Alex asked me to play in goal one week, I would stand between the pipes and try and block the puck, if the team needed a defender, I would stay back on the blue line and defend as needed.  I prefer scoring goals, but it isn’t about that anymore, and I am just happy I can still support the team, playing the game I love.”

“I expect Drew to help the younger players during this transition in leagues,” says Murray,  “I’m not asking him to put up the points he has done in the past, as that role will now be asked of some of the younger guys in the team.  His experience and decision making will be vital in key parts of games, and I expect him to be ready for any situation during the game, which I know he will be.”

Campbell will return in shirt #23 this season.  If you are interested in sponsoring a Devils shirt, or becoming a club sponsor, please contact devilssupporters@outlook.com.