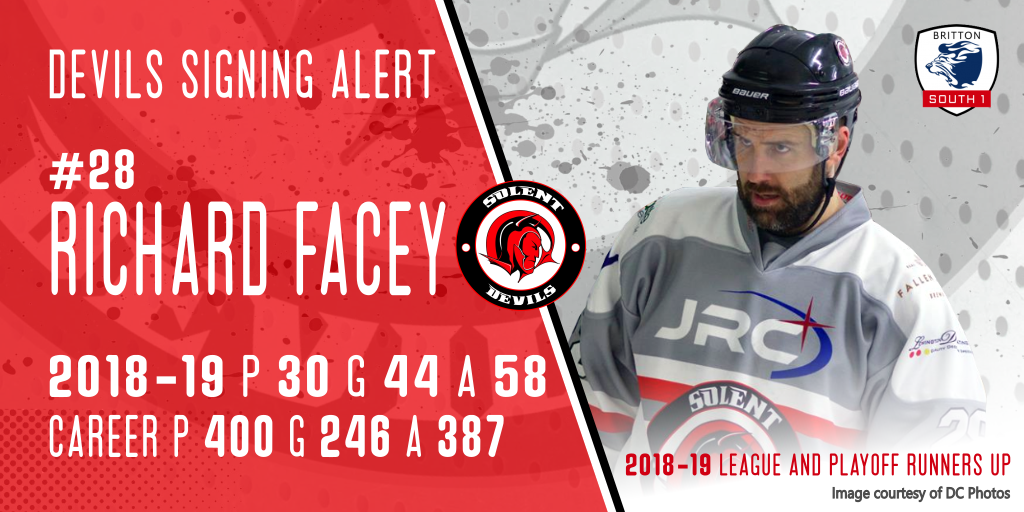 “I have had a great time here with the Devils,” said Facey, “the last few years have gone incredibly quickly, but it is amazing as we look back on it to see how far things have come.  For the team and organisation to be where it is now is incredible, and there are so many people that have contributed to that success.  I’ve enjoyed being part of it and I am looking forward to seeing it continue.  The team for next season is looking likely to be one of the best squads we have had, and they are all great guys as well.  The supporters who are coming to see us play now have been exceptional and really create a great family atmosphere, so when Alex offered me a spot on the team for another season it was a very easy decision to make.”

Solent Devils head coach, Alex Murray, talks of the easy decision he had to make when asking Facey to return.

“Bringing Richard back was a no-brainer, he has been the leading scorer in the league for the past two seasons and together we are changing the philosophy of hockey in Solent for the better.”

Facey’s return to the Devils will be his fifth season with the club, in a career totaling 129 games with 128 goals and 163 assists, currently seeing him in third place for Devils goals, assists and total points – and now holding the record for most points in a season, following his spectacular year last year when he amassed 44 goals and 58 assists.

“Richard isn’t one to look at his stats,” says Murray, “but does want to score goals at every opportunity, the great thing is that Richard would score in the big games, and we relied heavily on him during our league and playoff run.  His performance last year was exceptional, more so with what he is doing off the ice with the club and juniors, rather than on the ice!”

“I was disappointed with my performance last season,” says Facey, despite his many achievements and huge points tally.  “I had a number of areas in my game that were not at the level that I have been in previous year.  I picked up injuries throughout the season and often found myself struggling with aches, pains and fatigue.  This summer, I want to spend time improving my fitness, which I think will help me to avoid these issues next year and hopefully improve my contribution and performance for the team, in all areas of the game.”

The additional games that the team will be playing next year, in the reorganised league is something the Devils are working on over the summer, with Murray saying

“The extra games, the level of competition and the demand on the body will mean injuries may be more frequent, and those long term injuries will be more of a nuisance, hopefully with a good off season, Richard and the rest of the team will be fit and ready to compete.”

As they look back at the past few seasons, Facey reflects

“As a team over the last two years, we have been very consistent, and I feel that we have been constantly building and improving.  Winning the playoffs in 2018 was a really special moment and I think it left us all wanting more.  It was really painful to have missed out on winning all the other championships by such small margins, but it was a lot of fun to be in those competitions right until the end, and I think we have grown from the experience.  Hopefully we can carry this forward to our new challenge and try to put ourselves in contention again.”

This draws the thoughts towards the upcoming season, where the Devils will be playing in NIHL 1.

“I’m very excited for the new league structure,” says Facey, “I think that it will be exciting for all of our supporters to have high tempo, competitive games every week.  We have a group of players with a collective ability that deserve to be competing at this new level, and I am looking forward to seeing how a number of our players who have had great successes and growth in the past few years adapt to the higher level.”

Thinking of the team dynamic and how Facey fits within that structure, Murray sets out his expectations from the experienced forward in the new season,

“Richard will be expected to lead the team again with scoring, he is the player the team looks to when we need to generate offence, and he is always there to support the younger players as they develop.”

Facey will be returning in shirt #28 next season.  If you are interested in sponsoring a Devils shirt, or becoming a club sponsor, please contact devilssupporters@outlook.com.