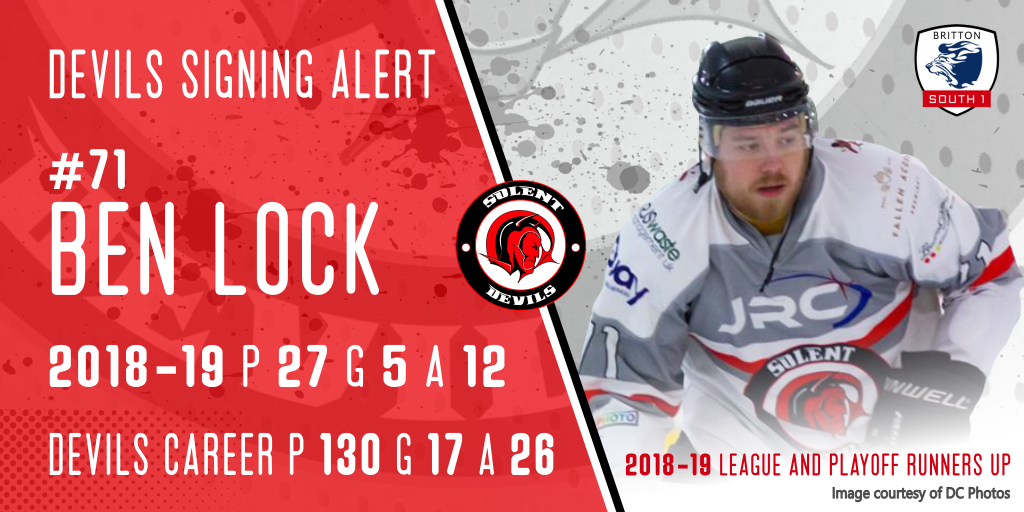 The Solent Devils are delighted to announce the return of defenceman Ben Lock to the team.

Lock has been a part of the Devils defence for the last five years, having played 130 games as a Devil, with 17 goals and 26 assists.

“There is no hiding my love for this club, the fans, the management, the team, and being part of the coaching set up for the Junior Devils,” Lock says, “This club is like my second family.  It’s always a privilege to put on the Solent Devils jersey, and to be doing it again in my sixth straight year, I am excited to be back.”

“Lock is a key member of the Solent Devils, he forms part of the core group who I build the team around, his experience for someone still so young is invaluable.  Ben is an important part of our special teams, as well as being our best shot blocker, with him being used at crucial moments in games, at both ends of the ice.”

“I never look at my points,” said Lock, “but it is always nice to chip in now and again!  It’s really about the team and myself as a defensive defenceman, making sure I do my job right, so our forwards can do theirs.”

“I’m always looking to improve on my strength,” Lock continues, as the thoughts start turning towards the new season, “This league will be similar to what the Devils are used to, fast, hard and playing against some very skilled forwards, so I need to concentrate on adapting my game back to that level.”

Murray, confident in the stalwart defenceman goes on to say

“The step up in leagues will be refreshing for most, and Ben in particular knows what he needs to do to be competitive in NIHL 1.  I’m confident that Ben will be ready for the task ahead and will be a leader in our team, helping the younger guys develop.”

“I think we will be a dark horse in this league,” Lock says, “We know the other teams and we can easily compete with them.  With the team Alex Murray is already building, I think the fans are in for another special year!”

Lock is also heavily involved with the youth programme at Solent, something Murray is obviously proud of.

“Ben has worked with the juniors for several years now, as part of our partnership with them.  The kids have a special bond with him, which is great to see.  Ben will continue his work with the juniors next year, as we look to develop Devils of the future.”

A fan favourite at Solent, Lock also has huge love for the supporters,

“For six straight years, the fans have been the extra person on the ice, as a team we can never thank them enough!  The noise they bring to home and away games always spurs us on when we need it and I can’t wait to play in front of them again.”

Lock will be returning in shirt #71 next season.  If you are interested in sponsoring a Devils shirt, or becoming a club sponsor, please contact devilssupporters@outlook.com.