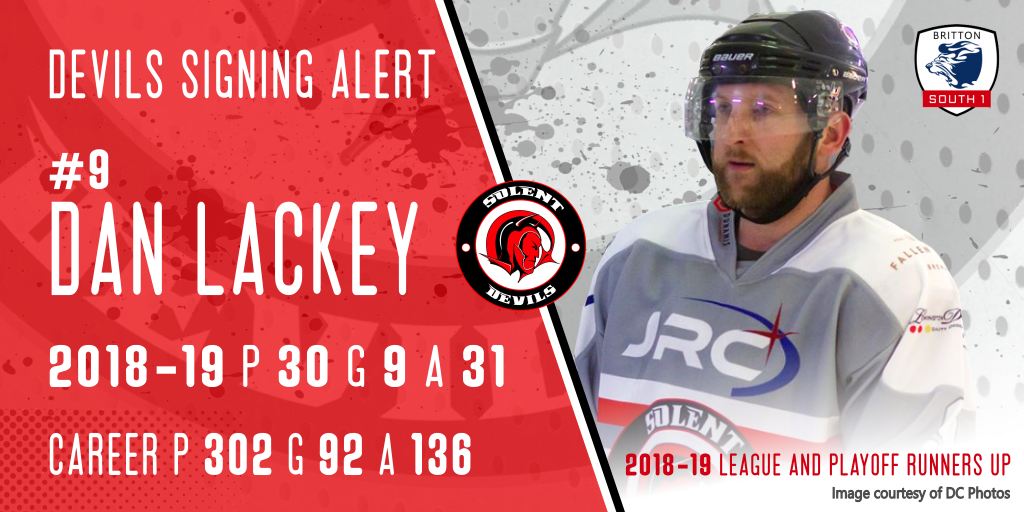 The Solent Devils are today pleased to announce the return of Dan Lackey for his second season with the club.

“Lackey was a wonderful addition to our line up last season,” said Solent Devils head coach, Alex Murray, “His hard work and determination were key attributes to him and the team having such a successful season.  Dan was one of the first players on my list to re-sign this season due to his experience and versatility, I am delighted he agreed to return.”

“The dressing room and the chemistry in the team is great, which makes it fun to play every week,” says Lackey.  “The set up at Solent is as professional as I have ever seen, with off ice volunteers doing an outstanding job so we can focus on hockey only, not to mention some pretty noisy fans!”

“I’m not one to focus on personal points, the two points for the team are all that matter.  This was my best points return to date, so can’t complain and I am just as happy blocking or making a hit as I am scoring a goal.  I did play in defence for more than half the season, but I do need to improve at burying my chances, I should have had more than 9 goals, I certainly missed a few!”

Murray, however, took slightly more of a positive view on Lackey’s performance the previous year.

“Dan was one of our best performers especially in the big games, he scored crucial goals, made plays and defended well every game.  His versatility helped us during a difficult period in the year which saw as many as three defencemen out at a time.”

Looking toward the new season, when asked about how he will utilise this versatile player, Murray gives little away,

“Dan’s ability to play both forward and defence means I don’t have a set plan for him yet.  I have an idea for Dan, but it all depends on who else we can recruit.  Regardless, I know wherever I play him, Dan will give 100% and never let us down!”

“All that was missing last year was the silverware, as a team I don’t think we can complain how the season went.  The new structure is certainly going to be interesting for sure, but our aim won’t change and that’s just to win each game as it comes.”

Lackey will be returning in shirt #9 next season.  If you are interested in sponsoring a Devils shirt, or becoming a club sponsor, please contact devilssupporters@outlook.com.