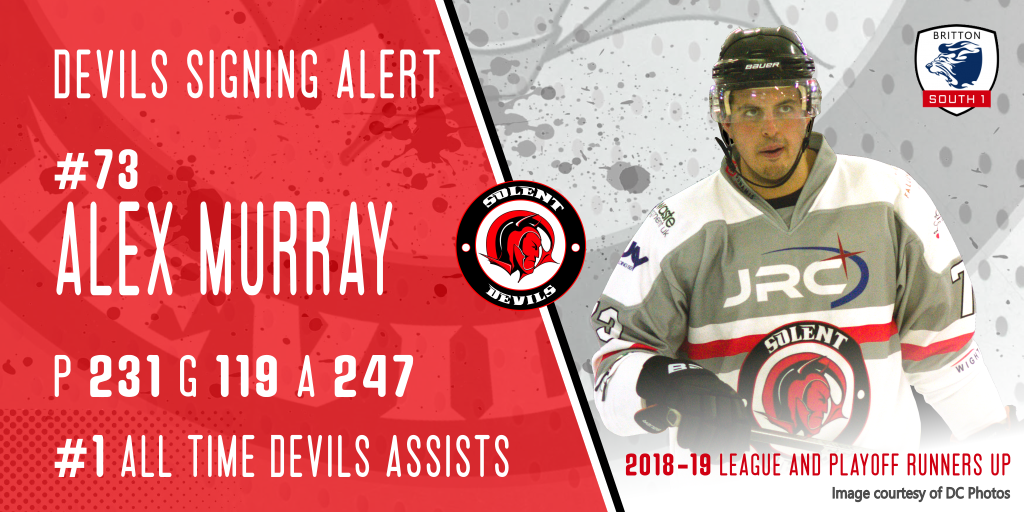 Today, the Solent Devils are delighted to announce the return of Alex Murray to the team.

Murray, who returned to the Devils in 2013, now heads in to his tenth season with the club and after the improvements made to the team in NIHL 1, Murray saw them to greatness in NIHL 2 following the league restructure in 2017, and now, heading in to the once more restructured league, Murray will be at the helm as head coach, as the Devils return to NIHL 1.

“I’m delighted to return as head coach of the Solent Devils, for what will be my seventh season in charge of the team,” said Murray. “The club is part of my DNA, growing up playing for this wonderful club, it’s been an objective of mine to change the club’s vision, ethos, professionalism and its reputation around the hockey community.  It has taken blood, sweat and tears, but I am really looking to continue to make improvements next season.”

“It is great to see Alex returning for next season, it’s good to work with him as he knows what it takes to bring out the best in the players and the staff, so the game experience for the supporters is second to none.”

Looking back over the last few years – especially their time in NIHL 2 – is somewhat bittersweet for Murray, the consummate perfectionist is happy with what the club has achieved, especially the growth the Devils have achieved, but there are always minor points where Murray feels he should have done better.

“The last few years have been wonderful for the club,” Murray begins, “the results on the ice have been phenomenal, which has allowed me and others to grow the club off the ice.  I’ve often looked back in frustration, to miss out on a league by one point one season and a head to head result another, as well as our narrow playoff loss last month!  However, if I look back overall, we have become a stable club with a solid fan base, we have developed players who have now moved to NIHL or national league, and we have a club to be proud of.”

Murray earned 87 points in the regular season (30G + 57A), and 2 goals and a further 3 assists during the playoffs, making him the second highest points producer in the team in the last year. 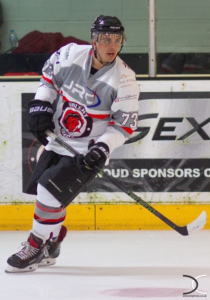 “My personal performance isn’t something I focus on too much, unless of course it’s having a negative impact on results,” said Murray.  “I look more closely at how I’m impacting the important games, and how well I’m doing with my plus/minus and special teams, all of which, upon reflection could have been better.  I set myself and my players, tough but realistic objectives every season, and as a result I feel maybe I could have done slightly better when the team really needed it.”

Looking forward to next year, where the league restructure will put a new national league in place, the Solent Devils will return to NIHL 1 where they will play against experienced NIHL 1 teams such as Milton Keynes Thunder and Invicta Dynamos, plus Oxford City Stars and Chelmsford Chieftains are among the group reforming this league.

“The league structure change next season is overdue,” said Ferguson, “given the obvious divide between the top seven teams and the lower seven.  With the Solent Devils returning to NIHL 1, then not only are there more games but the games will be close and tough, teams will be going for the win in regulation time, so fitness is going to be key to a successful season.”

“Next season is going to be tough, we will very likely be the only pay to play team in the league, with all of the other teams able to financially support players,” said Murray, 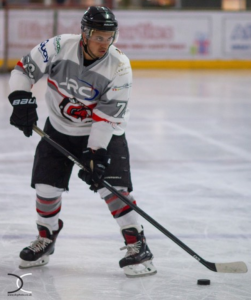 “it makes us handicapped before a puck is dropped.  That said, we are a determined, spirited bunch and I have players that play for the logo on the front of a jersey rather than the back, that team first attitude will win us games and that’s all I can ask of my team.  Previous to our time in NIHL 2, we were making big inroads in the NIHL 1 and beating teams regularly, and I will look for the same again this year!  We are in an awkward position because there are clubs who will stay in NIHL 2 who are financially more secure and can support players more than us, however our performance, results and ability even as a pay to play club often misleads people into thinking we operate on a budget.  Realistically, we want to challenge ourselves and test ourselves against the teams in NIHL 1, and I for one am excited to get back to where we left of two seasons ago.”

Murray will be returning in shirt #73 next season.  If you are interested in sponsoring a Devils shirt, or becoming a club sponsor, please contact devilssupporters@outlook.com.