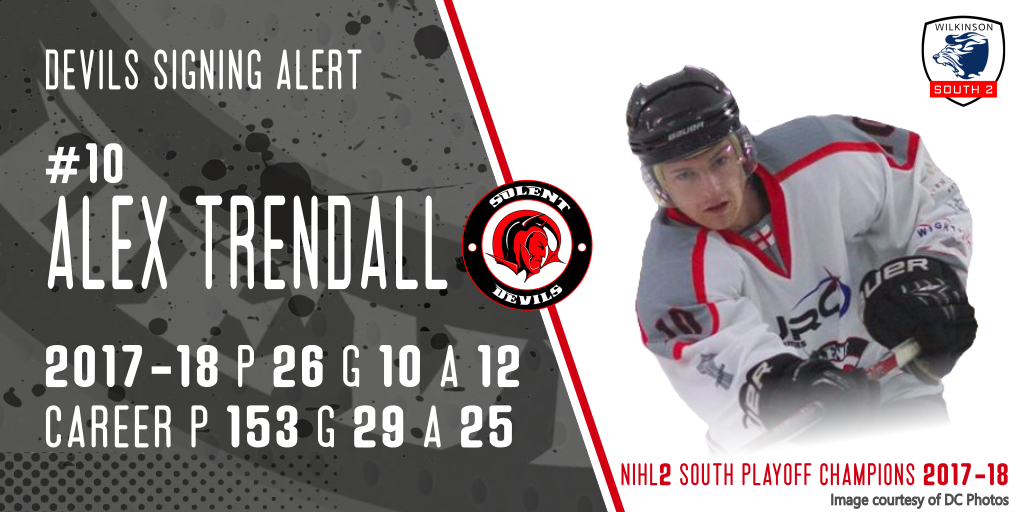 Today, the Solent Devils are pleased to announce the return of Alex Trendall to the line up.

The forward last year put in 26 performances for the Devils with 10 goals – one of which during the play off finals – and 12 assists.

When talking about why he re-signed for the Devils again this season, Trendall simply says

“Solent is a home team for me, the whole set up and atmosphere is like a family.”

“Alex has been with the organisation for several years now and it is always a preference of mine to bring back guys who are already aware of the set up and what I expect.”

Looking ahead to the upcoming season, Trendall says

“I think we have a really good chance this year, Alex has made some really good signings over the summer and the team he is putting together is shaping up to be truly competitive.  The team, with the effort the guys put in during practice and games should see us do very well.”

Murray, who is constantly looking at his players and adjusting what they do and where they play to try any get peak performance from them talks about Trendall’s performance last year,

“Alex made great strides last season, physically on the ice but also off the ice.  We switched him back to the right-wing mid-season, which seemed to work wonders for Alex’s performance and point production.”

“My goals for the upcoming season,” says Trendall,

“is to help the Devils finish in at least the top three if we don’t win the league and to defend our title as play-off champions, retaining the cup we fought so hard to win at the end of last season.”

When discussing what position he will take within the team this season and his pairing with Mark Pitts last year, Murray says

“I haven’t completed my roster yet, so I cannot confirm who will play with whom, however, Alex is a player who offers us offensive options, in particular with his speed and puck control.  The good thing about Alex is, he is comfortable on both wings and can play several roles within the squad.”

As for the upcoming season, the excitable Trendall says

“I’m really looking forward to getting back out on the ice with the lads, and hearing the crowd cheer us on.”

Trendall will be returning to the Devils in shirt #10.  If you would be interested in sponsoring any of the Devils, or becoming a team sponsor, please contact devilssupporters@outlook.com.