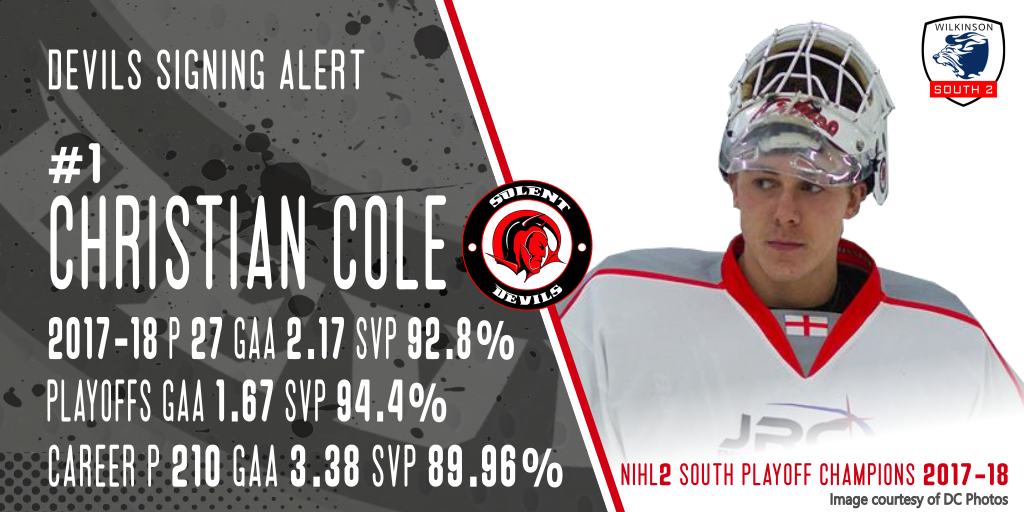 Devils Number 1 Back Between Pipes…

“Chico is the best goalie in the league.  He is a big game player, who wins games single handedly – the play offs were a perfect example, where he backstopped us to the cup!”

“I’ve returned for another year with the Solent Devils, as I feel very at home and it is where I play my best hockey.”

“Everyone in the team is very comfortable and confident when Chico is behind them, he gives you a chance to win every game.”

Looking towards the upcoming season, there is a high expectation on the Devils to perform following their fantastic season last year, and Cole is preparing for this.

“I always set myself very high targets and expectations.  This year I will certainly be looking to improve on last season, with eliminating the losses we had, and secondly to improve on my stats – although this is less important as long as we are winning the games.”

“I don’t think the pressure will change at all in the upcoming season, we put the pressure on ourselves last year – to chase the league and the play offs.  The same thing applies this year, but we want all three trophies!”

Murray, too, is looking for another good year for Cole, setting his expectations out early by saying

“I expect Chico to continue performing at a high level, winning games, and giving us a chance in every game.  Chico experienced a different side to being a goalie last season, when he will go through games only facing 10-15 shots, when you are used to facing 50 or 60 shots a night, that kind of swing can off set you a little.  I’m glad Chico is developing that side of his game and keeping focused when he isn’t involved as much.” 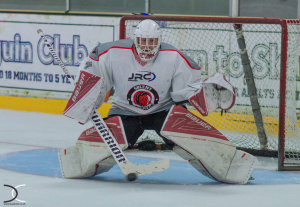 Talking about his development, Cole is still working on his fitness and performance over the summer, always looking to improve in anyway he can.

“I’m not on top until we, as a team, win all three trophies next year.  Saying that, I work very hard on and off the ice to achieve this, and I’m being coached by Chris Peden at Hope & Anchor Fitness, so the best of me is yet to come.”

As much as Murray talks about Cole being the one to win games, there is obviously the whole team in front of him where there are expectations too,

“All we expect Chico to do, is make the first save.  If he stops the first shot, the defence must do the rest.  Keeping forwards to the outside and putting opponents in limited scoring positions will give Chico a better chance to keep the puck out of the net.”

As a final piece in the conversation, Cole was asked what, if anything, he is looking forward to next year.

“I’m looking forward to another successful year at the club with all the existing and the new players – and also singing ‘Country Roads’ with the fans after every game!”

Cole will be returning in shirt number 1, and is currently looking for a shirt sponsor. If you would be interested in sponsoring any of the Devils shirts, or becoming a team sponsor, please contact devilssupporters@outlook.com