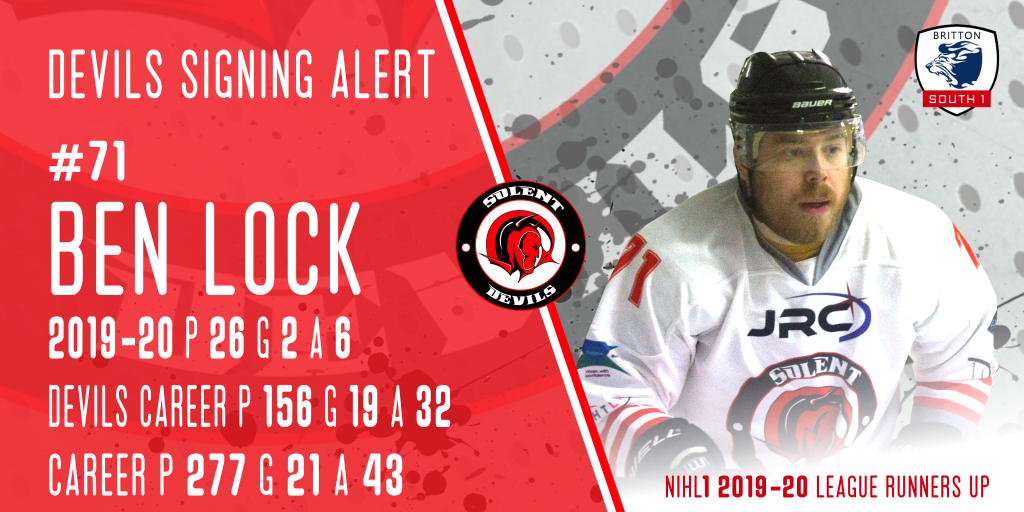 Today, the Solent Devils are delighted to announce the re-signing of British defenceman, Ben Lock.

The veteran defender returns to Solent for his seventh consecutive season, and excitedly says,

“There is no secret of my love for the club, I wouldn’t play anywhere else. This really feels like my second family, from the management to the coaching staff – and the fans!  We were onto something special last season, and we definitely have unfinished business. The team Alex is bringing together is exciting, and I am really looking forward to being back on the ice.”

Alex Murray, Solent Devils head coach is obviously happy to have the stalwart defender back again.

“Ben is a key member of our squad, who is very experienced at this level,” Murray says.  “Ben is a team first guy, who is willing to put his body on the line for the benefit of the team!  His presence in our end is essential to our success.”

Over the shortened 2019/20 season, Lock played 26 games, scoring a pair of goals and helping out with 6 assists.  These numbers add to Lock’s impressive career totals, where he has played 277 games, with 21 goals and 43 assists – the Devils have been lucky enough to have the skilled blue liner for 156 of those games, where from his totals 19 goals and 34 assists have been for the Devils.

“I was reasonably happy with my performance last season,” says Lock.  “After two years out of NIHL 1, it is pleasing to still be able to play big minutes for Alex and help the team be extremely competitive.”

“Locky had a great season, his defensive stats speak for themselves, but I was definitely impressed with his offensive contributions too, which have seen Ben become a top player in this league.”

From his early years in Guildford, Lock moved to Slough where he was part of the 2010/11 ENL2 league championship squad.  Lock moved to Wightlink Raiders in 2012/13, and a year later with Raiders went all the way to the Playoff final, where the team were runners up to Chelmsford Chieftains.  His move to the Solent Devils in 2014/15 saw Lock go on to be part of the playoff winning team at the end of the 2017/18 season, where the Devils beat Chelmsford in Bracknell.  Looking ahead to the upcoming season, Lock simply says

“My aims are very much the same as the last six years, to be solid in defence – whether that’s blocking shots or corner battles, which allows our highly skilled forwards to do their job.”

“I want more of the same from Locky this year, his performances have always been consistent, and I am excited to see him back out on the ice.”

Lock returns to the Devils in shirt #71.  If you would like to sponsor a Devil, or find out about becoming a team sponsor, contact devilssupporters@outlook.com.