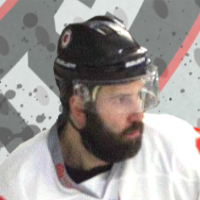 Facey, having come through the youth system at Solent, went to Basingstoke in 2003 then spent a few seasons with the Buffalo with some time over on the Isle of Wight.  Facey then spent three seasons in Canada with the Banff Academy Bears, before returning to England and the Wightlink Raiders for the 2010/11 season and the subsequent few years, coming back to Solent to start the 2015/16 season.

“I’m very happy to be back,” Facey says, “I’m really proud to be part of the community of the Solent Devils and I’m very excited to see everyone, hopefully soon, after such a long break.  With the programme that Alex has put together, I believe we are a top club to play for that gives a good opportunity for young guys to grow and improve, by playing along side more experienced established players.  I’ve enjoyed being part of that and hope to help it continue.”

“Richard is my right hand man, he has become so involved with the club that it would not feel right without him standing next to me.”

Over his career, Facey has played 428 games, scoring 277 goals and earning 422 assists – meaning he is just one point from 700 career points.  The list of accolades and achievements earned by Facey is possibly one of the longest for any player, with three consecutive seasons being voted into the all-star team, a league championship, two time BUIHA tier one champion, and won the post-season playoff competition twice (including with the Devils at the end of the 2018/19 season).  For the Devils, in his 157 games, Facey has found the back of the net 160 times and contributed 201 assists.

“As always, there were some elements of my game that I was happy with last year and some that I wasn’t,”

Facey comments, humbly, after the 2019/20 season saw him earn the most points in the league for the second consecutive season.

“I lacked some consistency, as I was not in the physical condition that I would have liked to have been in.  With the long break, I have put some time into working out and so hopefully I will see the benefits this season.”

Murray, somewhat more enthusiastically, is prepared to give the veteran forward the credit he deserves for his efforts over the last season,

“Richard’s stats speak for themselves.  He was top points scorer in the league, voted as an all-star forward, and contributed in every game. I was very happy with his contribution last season, which is indispensable at this level.”

After the 2019/20 season was cut short, with the Devils in second place in the league and chasing the top spot, with their eyes once more on the playoffs, thoughts start heading towards the upcoming season, and the possibilities it could bring.

“My goals this season are for the club to compete again,” says Facey, “with the hope to be in the conversation for silverware at the business end of the season.  I think that with the core group that we have, we can have a really good season and I’m looking forward to getting started again.”

“It will be another difficult season,”

Murray cautions, as his ever vigilant view on the rest of the league and the movement of players within it over the summer shows him how the competition will be when games finally get underway.

“With teams around us investing in additional players to try and compete, we have to keep improving if we want to keep up!  Richard has to continue leading the line and be a big player in the big games.”