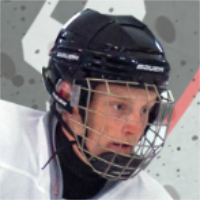 “I am please Harry has returned for his first full season with the Devils.  Harry is a wonderful talent, with a great attitude towards learning and improving his whole game.”

In the 2019/20 season, Cloutman contributed four assists in his twenty five games for the Solent Devils, while on a two way with the Devils D2 team and playing for the under 18 team.  Cloutman was also the winner of the coveted Shane Clacy award, presented to the player who has shown an exceptional attitude throughout the season, both on and off the ice, on game days and in training.

“Last season was a good season,” says Cloutman, “my overall play has developed, and I am proud of my points, even though my numbers are not the highest.  Being presented with the Shane Clacy award was an honour, something I am really proud of.”

“The set up in the club has allowed Harry to be on the ice a lot last season, including junior hockey, NIHL 2, and coaching, in addition to the Devils.  This has allowed Harry to develop his all round game and also learn what it takes to play senior hockey.  Harry’s commitment to training, games and the club is unquestionable.  He is always the first player to arrive and the last to leave, his dedication should be rewarded and I was delighted to present him the Shane Clacy award, especially as Harry started and played most of his career at Solent.”

Looking ahead to the new campaign, Cloutman sets out his expectations,

“This season coming, I am hoping to make a positive impact on the team, both on and off the ice.  I feel that we are going to be battling at the top of the table again.  Last thing to say is that I am excited for the upcoming season, I can’t wait to see everyone on game days, and hear all the fans.”

Murray, too, has expectations for the 18 year old,

“Harry has to continue his development across both NIHL 2 and the Devils, logging bigger minutes with more responsibility at NIHL 2 until he is ready to hold down a regular role with the Devils.  I am sure that regular ice with the senior Devils is not far away.”