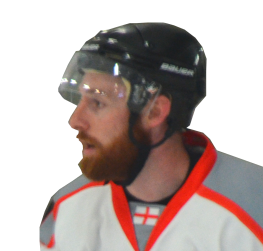 Perella-Fox’s career with the Devils spanned 25 games, where he scored four goals and earned four assists. Perella-Fox also played in the junior programme in Gosport, 78 games with 41 goals and 41 assists.

When talking about why he has returned to the Devils, Perella-Fox says

“It’s the love of the sport, I have missed ice hockey ever since I stopped playing, and I played most of my hockey at Gosport. I always wanted to return to Gosport, and I know a lot of the guys there, and I know they are a good bunch.”

“Calumn is a player I coached as a junior at Gosport,”

“I have continued to watch him develop at inline hockey, playing in national and European championships. Once I realised we would be short on defence this season, it was a no brainer to ask Calumn to join the Devils.”

A three year break in ice hockey, is quite a period of time and the gap is obviously something Perella-Fox is thinking about,

“My goal is to build my confidence as a player, and get back playing at a competitive level of ice hockey. I know the Devils already have a strong defence, I hope I can add to that.”

Murray, however, is confident that Perella-Fox will fit into the line up well,

“Calumn is a team first guy who will fit into our ethos with ease! He is a good puck carrier who reads the game well, he can help us on special teams with his calmness and energy.”

“I’m looking for Calumn to hit the ground running,”

“he will be expected to play a vital role in our defensive unit and he will need to settle back into ice hockey quickly.”

Despite any nerves he may be feeling, Perella-Fox is excited to be coming back to hockey