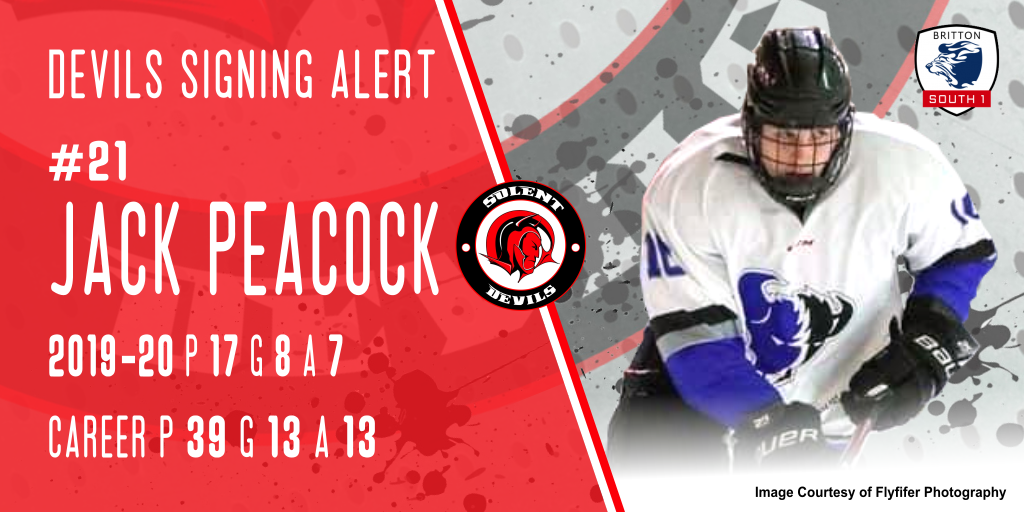 Today, the Solent Devils are excited to announce the signing of Jack Peacock, who will be on a two-way deal with the NIHL2 Devils.

“I am delighted to be able to bring Jack to Solent,” Solent Devils head coach, Alex Murray, said.  “Jack is a young prospect who has shown his potential in Basingstoke, playing and putting up good numbers in senior hockey, while still a junior!”

“I’ve heard some great things about Solent the last couple of seasons,” says Peacock.  “The club has become really professional, and I am very excited to become a part of the organisation for the next step forward in my career.”

After coming up through the youth teams in Basingstoke and Bracknell, Peacock spent the last two seasons with the senior Basingstoke Buffalo in NIHL2, where last year he played 17 games, scoring 8 goals and putting up 7 assists – this brings his senior career up to 39 games, with 13 goals and 13 assists.

“Jack will be playing on a two-way with the NIHL2 Devils, which will help with his development and also ice time.  The more young prospects are on the ice, the more time they have to develop.”

“My aim for this season is to gain the experience I need to develop as a player,” says Peacock, showing his attitude and desire to grow as a player, “and to work on key attributes that will help me excel in my game.”

“I’ve seen Jack skate a few times already this summer, and I am excited by his size and skill set, which will be a good addition to our forward line up.”

Peacock will be joining the Devils in shirt #21.  If you would like to sponsor a Devil, or find out about becoming a team sponsor, contact devilssupporters@outlook.com.