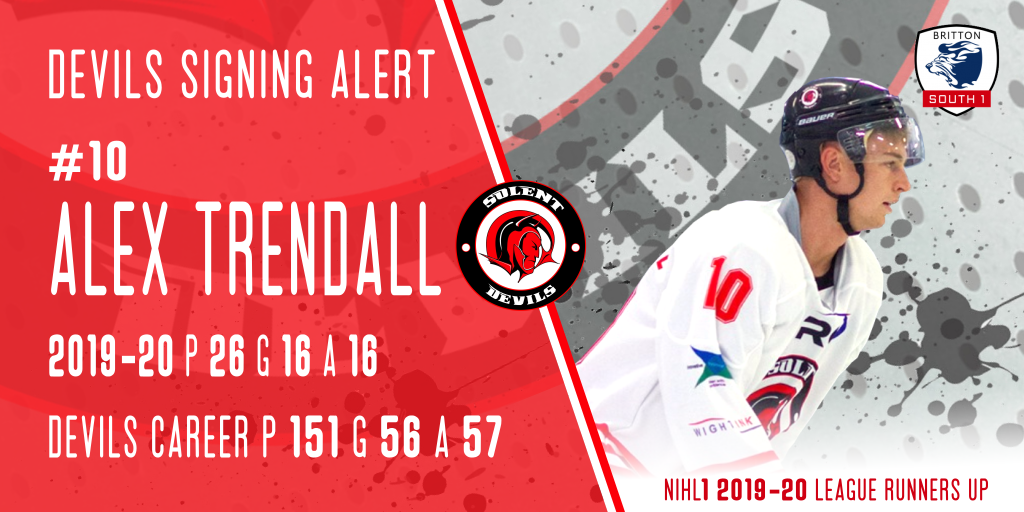 The Solent Devils are excited to announce the re-signing of fan favourite, Alex Trendall.

The British forward returns to the squad for his sixth consecutive season, since returning to England from a year in America with the Tampa Bay Juniors.

“The reasons I have remained at Solent are simple,” says Trendall, “they’re a very consistent and professionally structured team, and a great set of guys.  The fan base is great too, which is a huge boost when we are on the ice.”

Solent Devils head coach, Alex Murray, who is the one who signed Trendall to the Devils back in 2015 says

“Trendall is a wonderful piece of the puzzle.  Alex has speed and a skill set which is different to our other forwards, so provides us with good options up front.”

Last season, Trendall scored 16 goals and earned 16 assists in 26 games, bringing his Devils career to 151 games, with 56 goals and 57 assists.  These stats make Trendall 11th for all time games and all-time goals for the Devils, and 14th for all time points.

“I don’t think I am ever really content with my performance,” Trendall says.  “I am always looking to perform and being part of a well-structured team, I feel like I improve every year.”

Murray, who is proud of the whole Devils organisation for the way they promote development, is obviously pleased by Trendall’s approach.

“It’s great Alex is always striving to improve.  Consistency will be key this season, but we are really excited at the prospect of seeing him perform at this level again!”

As well as his time with the Devils – where he was part of the playoff winning team from 2017-18, and his time in the US with Tampa Bay, Trendall has come from the youth programme and started his senior career on the Isle of Wight.  Looking ahead to the new season, Trendall talks about his aims

“This season, we have got to make playoffs – that’s a given.  As for personal, I feel I need to work on eliminating mistakes.  It’s fine having games with big leads and racking up points, but mistakes against the big teams will cost you more than the stats sheet.”

Murray, echoing what he has said previously, agrees with Trendall by saying

“Consistency is the main thing we need this season, Trendall knows this, and knows what we are looking for.  Being swift on attack and clinical in front of the goal, while being agile enough to get back to defend is what will help win us games this season, and Trendall provides us a great resource in these areas.”

Trendall will return to the Devils in shirt #10.  If you would like to sponsor a Devil, or find out about becoming a team sponsor, contact devilssupporters@outlook.com.