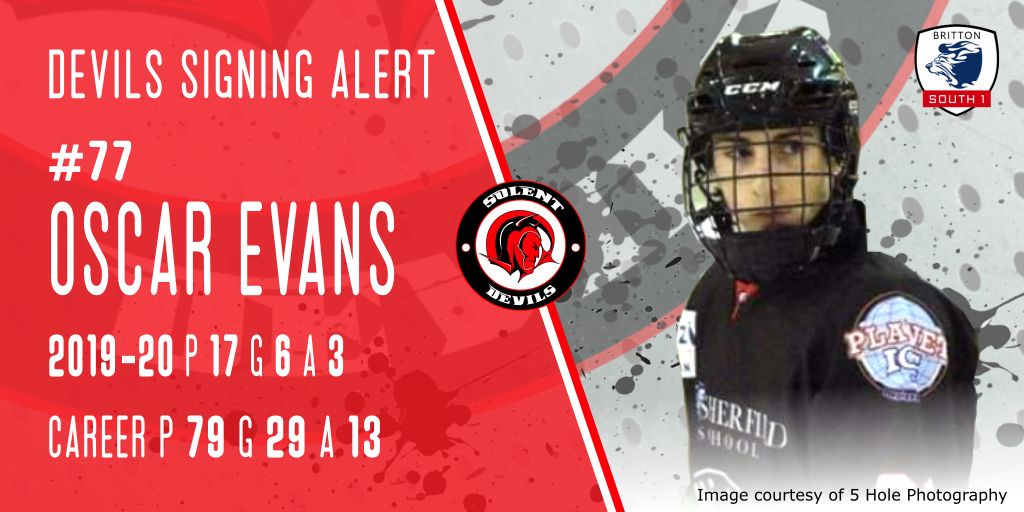 “As soon as Alex approached me about a potential move to Solent, I spoke to a few of the guys and they all said nothing but positive things about the club,” says Evans.  “I spoke to Alex for a while, and I thought it could be the perfect environment for me, while I am still young and learning the game.”

“I’m delighted to be able to secure Oscar for the up and coming season!  He is a very talented young player, with experience of playing in the national league.”

Last season, Evans played 11 games for Basingstoke Bison and 6 for Basingstoke Buffalo, where he scored six goals and assisted on three others.  At just 19 years old, his senior career now consists of 79 games with 29 goals and 13 assists.

“Whilst I am with the Devils,” Evans states, “I will give everything I’ve got to try and give this team success!”

“Oscar needs game time at senior level,” comments Murray.  “Oscar has had the opportunity to play national league, learning his trade alongside some very talented players, however, now is the time for Oscar to get the game experience and continue his development with the Bison, while training and playing with the Devils.”

From starting in the youth system in Basingstoke, Evans played at Swindon for a few years before moving back to Basingstoke for the start of his senior career, and was part of the NIHL 1 league champion Bison team in the 2017/18 season.  Looking ahead to the upcoming season, Evans simply says,

Murray, obviously has big plans for his newest signing, going on to say

“Oscar will be expected to play an important role this season, with some players not returning, we need the likes of Oscar – and others – to step into these key roles.”

Evans will be joining the Devils in shirt #77.  If you would like to sponsor a Devil, or find out about becoming a team sponsor, contact devilssupporters@outlook.com.