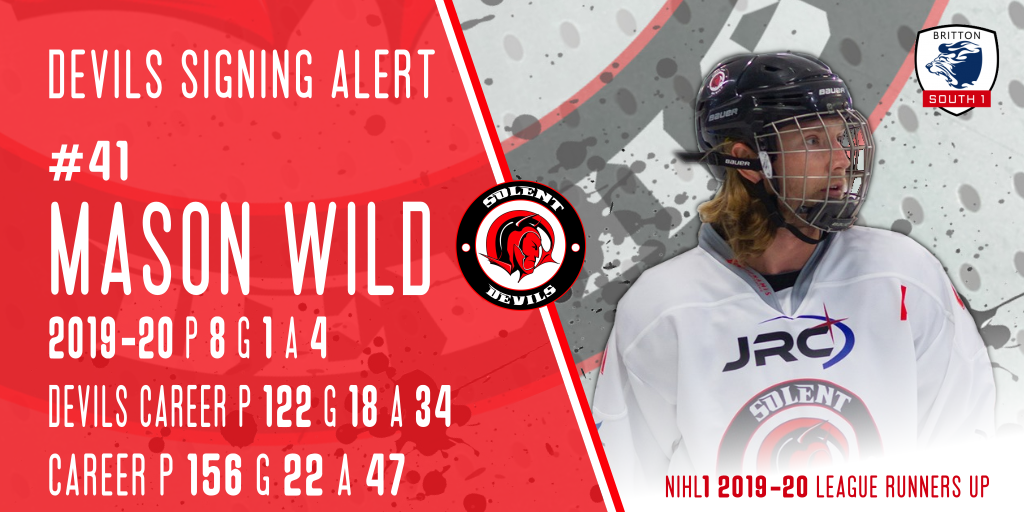 Today, the Solent Devil’s are delighted to welcome back British defenceman, Mason Wild.

“I’ve played for the Devils for five consecutive seasons and every season has been great,” says Wild, when talking about why he has re-signed once more with Solent.

“The atmosphere from the fans is excellent and we are always pushing to compete with the tougher teams. It’s where I started playing and now that I’m permanently living on the South Coast, Devils are my home team.”

“Mason is an exceptional player,” Devil’s head coach, Alex Murray, proudly states. “He has loads of experience, with a very clear understanding of the clubs philosophy and the direction we are going. Mason is a very reliable player on the ice, and can be very versatile in his position.”

Wild played just eight games last season before having to unexpectedly cut the season short.  Those eight games however, added a goal and four assists to his Devil’s career stats, now standing at 18 goals and 34 assists in 122 games, with the club where he first started playing hockey.

“I had a regular succession of injuries over the past few seasons and this has been a great time to recover properly and get ready for the season ahead. I’ve been doing a decent amount of fitness and rehab which will hopefully help me back on the ice.”

“I was devestated for Mason when he suffered his finger injury, which was one of the worst I’ve ever seen,” sympathises Murray, who is no stranger to injury himself.

“It has taken a lot of time to recover from, so I’m hopeful Mason will be back to full fitness to fulfil his role as alternate captain for the team. Mason will be a key player in our squad, expected to play big minutes, and I have no doubt he will perform when on the ice.”

After his recovery and looking forward to the season ahead, Wild jokes,

“I always laugh with Alex that my goal for the season would be to have a full one – luckily I’m not that superstitious! With everything that’s going on in the world at the moment it’s hard to predict how the season will unfold.”

Having been a league champion in 2013/14, and as part of the playoff winning team from the 2017/18 season, then playing in the final the following year, Wild is used to playing the important games – not accustomed to sitting on the sidelines.

“I’m excited to get back on the ice and play some competitive hockey. It was strange being a spectator last season but was also great to watch such a strong team.”

Murray wraps things up simply by saying, “I hope Mason has a positive season, he deserves it following last year’s incident. I know, if we have Mason on the ice, we have a much better chance of winning!”

Wild returns to the Devils in shirt #41. If you are interested in sponsoring a Devil, or becoming a team sponsor please contact devilssupporters@outlook.com