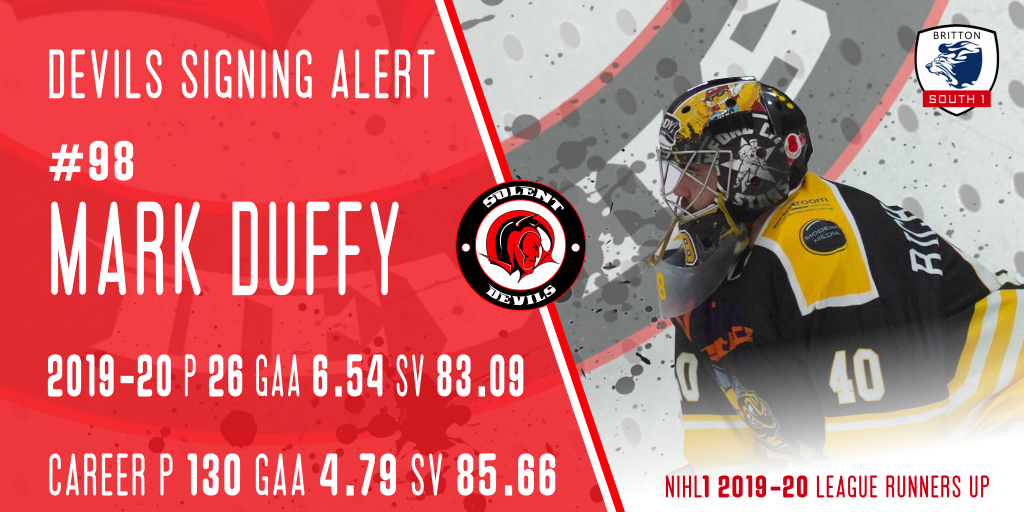 Today, the Solent Devils are pleased to announce the signing of British netminder, Mark Duffy.

Duffy moves to the Devils from Oxford City Stars, where he has spent almost half of his senior career, after moving from Bracknell in 2016.

“I’m joining the Devils because I think they’re a great organisation,” Duffy says.  “I’ve seen them come on a lot over the past few years, and I am really excited to be a part of that.  I’ve known Alex Murray since we were kids, and I know he’s a winner – I’m looking forward to being coached by him.”

“I’ve known Duffy since we were kids,” echoes Devils head coach, Alex Murray, “I’ve played a lot of hockey – mainly inline – with him and he is a great guy, very experienced between the pipes at this level.  I have tried to sign Duffy a few times during my tenure with the Devils, so I am delighted I have finally managed to bring him in.  Mark will provide competition to Chico, which is both healthy and needed at this level.”

Duffy’s career spans 130 games, with a 4.79 GAA and a save percentage of 85.66% and was part of the league winning Oxford team over the 2017/18 season – the year Oxford pipped the Devils to the league title.

“I’m hoping to bring a strong alternative to Chico in net,” says Duffy, when asked his reasons for the move.  “Chico is one of, if not the best goalie in the league and I want to push him to make sure he stays at his best all season long!  I hope I can bring a bit of experience to the squad as well, which has some great young players in it.”

Murray lays out his expectations for his new signing, simply and concisely,

“Duffy has been around the game long enough and understands his role well.  He has been brought in to challenge Chico and he recognises that he has an opportunity to join a club who are heading in a really positive direction – we are really happy to have him involved.  We will be looking for Duffy to win us games when in net, and to quickly become acclimatised to the small rink at Solent.”

Duffy joins the Devils in shirt #98.  If you would like to sponsor a Devil, or find out about becoming a team sponsor, contact devilssupporters@outlook.com.