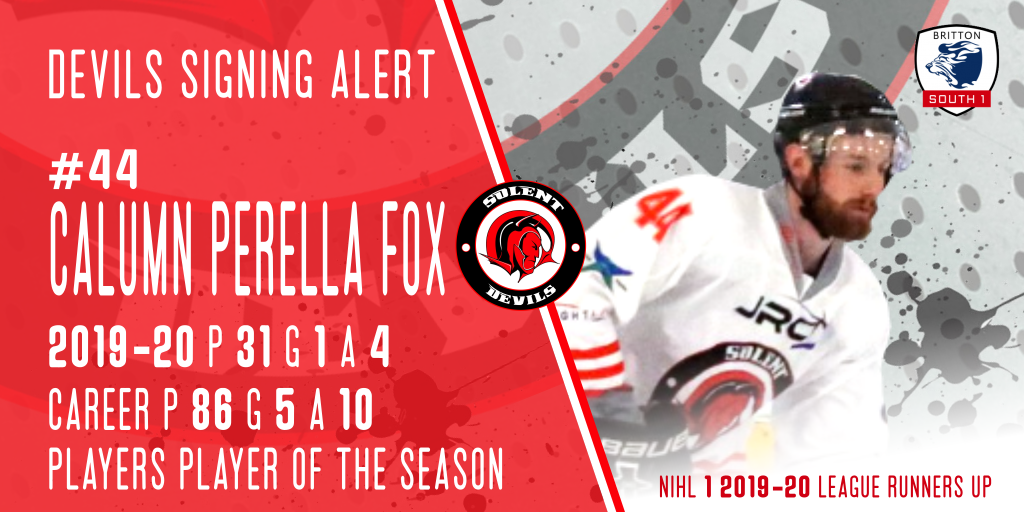 Tonight, the Solent Devils are delighted to announce the return of seasoned defenceman, Calumn Perella-Fox, for his third consecutive year with the club.

When asked why he has returned to the Devils, Perella-Fox says,

“A few things that come to mind, the changing room and the team is great, we are like a family and I couldn’t see myself not returning.  The fans are great at Solent, too, they make the game days so much better.”

“I am delighted to welcome back our players player from last year,” says Alex Murray, Solent Devils head coach.  “Calumn is a valuable asset to our club, his versatility allows him to play in several positions and roles within the team throughout the season.  He is a team first guy, never giving less than his all.”

Last season, Perella-Fox scored once and earned four assists, with just twenty four penalty minutes from his 31 games, and was awarded Solent Devils players player of the year, an especially prestigious award, as this is chosen by the other members of the team.

“I was happy with my performance last season,” says Perella-Fox, “but feel I could also bring a lot more to the team on the ice.  Hopefully, as my confidence grows, I will keep improving.  Being awarded players player is such a great award to get, and I feel that was my best achievement from last season.”

“Calumn’s performances are not about statistics.  His work rate, versatility and consistency are all the reasons why he was recognised by his peers, his efforts every week in training, the way he applied himself, this is only visible to the guys in the locker room.”

This may be Perella-Fox’s third consecutive year with the club, but he is not new to the Devils, having come through the youth system at Solent into senior hockey, including being with the ENL2 championship team in 2011/12.  Perella-Fox moved to Wightlink Tigers for the 2012/13 season, where he played for two years, before taking a few years out of ice hockey, returning to Solent for the 2018/19 season.  Looking ahead to the new season, Perella-Fox says

“I know I still have a lot more to show, and I want to continue to develop.  I am here to help the team, but I will also, hopefully, get some more points on the board.”

“Confidence is a massive part of the game, and while I may apply pressure with the coaching techniques I use, I will be helping Calumn to build his confidence during games.  Calumn already knows that his performance is enough to get him a spot on the team, but every player on the team knows they need to work to keep their spot, consistency is a big part of that.”

Perella-Fox will return to the Devils in shirt #44.  If you would like to sponsor a Devil or become a team sponsor, contact devilssupporters@outlook.com.