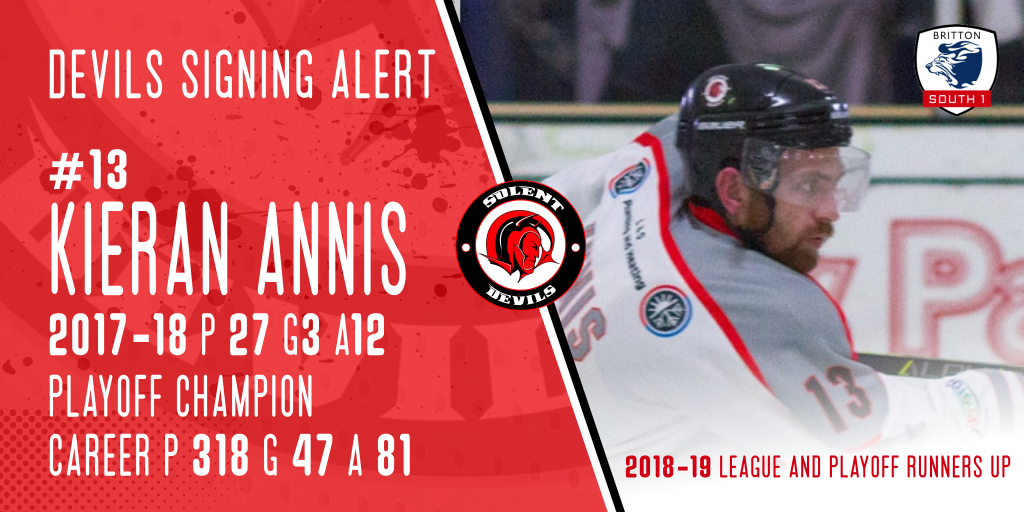 Tonight, the Solent Devils are delighted to announce the return of British defenceman, Kieran Annis.

Annis has played 318 games in his senior career, mostly on the Isle of Wight, including winning the playoffs in 2014/15.  Annis moved to the Solent Devils for the 2017/18 season, where he played 27 games, helping the Devils win the playoffs in Bracknell, against Chelmsford Chieftains.

When asked why he has chosen now to return, Annis says

“I’ve been off the ice for 18 months and had really started missing the sport.  I’ve had to evaluate things, and my career – unfortunately – took a front seat.  However, while this is still the case, I am in a position now where I think I can commit to playing, so we will see how it goes.  Alex has been in touch last season, and this season, it was nice to know that I always had the opportunity to return to the Devils.”

“Kieran becoming available couldn’t have come at a better time for us,” says Devils head coach, Alex Murray.  “We are very short on players at the moment due to injuries, suspensions and personal reasons.  I reached out to Kieran and it appeared to be the right time for him to make his return.  Kieran is an experience player who can play both forward and defence, and fits into our team and our philosophy perfectly.”

Over his career, Annis has scored 47 goals and helped out with 81 assists, 3 of those goals and 12 assists during his season at Solent, but Annis hasn’t played hockey since the end of the 2017/18 season.

“Kieran hasn’t skated in a while, that said, after three training sessions he is going to be chucked in at the deep end as we have a double header.  I am confident Kieran will perform well this first weekend.  After the upcoming weekend, Kieran will be competing for a top four spot, which will be healthy competition for our defensive core.”

“I’m not worried,” says Annis, “I am quite self-critical, and I’ve expressed my struggles of remembering how to skate after the time off.  I’ve been assured that’s not the case.  My main concern when playing has always been letting the boys down, so I will do what I can to make sure that doesn’t happen.”

“Like most hockey players, it only takes a few weeks on the ice to be back up to speed.” Murray states.  “Kieran has trained for almost a month now, so I feel he is ready to step in and make a contribution – ideally in a more comfortable scenario, but some people thrive when you throw them in the deep end!”

“Right now, I am here to provide cover for the injuries and suspensions the squad is unfortunately going through.  I am probably coming back a week or two earlier than I was anticipating, but I will be ready come the weekend.  In addition to that, hopefully I will be able to rub off some experience to the younger guys, there are some really good, young players in the team, and if they aren’t helping me I would like to be helping them where I can.”