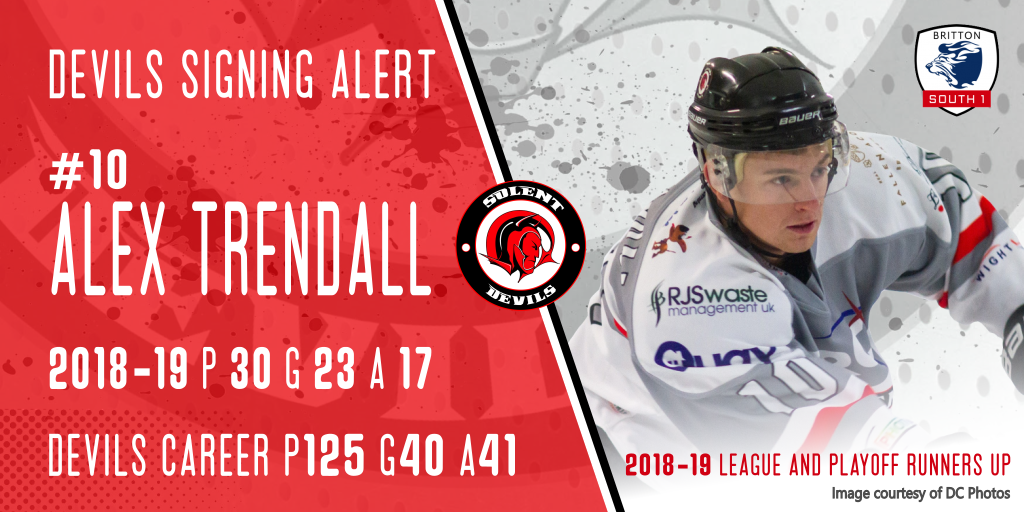 Today, the Solent Devils are delighted to announce the return of Coach’s player of the year, Alex Trendall.

This will be Trendall’s sixth season with the Devils, last year being his most productive season yet, 23 goals and 17 assists in the 30 games he played.  Last year brings Trendall’s stats as a Devil to 125 games with 40 goals and 41 assists.

“Alex’s performances last season were the accumulation of hard work by myself, the coaching team and him, for the last three years,” says Devils head coach, Alex Murray, “We have overcome many things with Alex, including his confidence and I was delighted with his maturity and output last season!”

“Solent is nice, the team atmosphere is amazing, there is so much banter with the rest of the guys in the changing room, and on the ice we are all in it together, it truly is a team, and it is amazing when the fans are chanting my name.”

“Next year will be hard, I think,” Trendall muses, “The teams will be playing harder, the competition will be much more fierce, and we are used to being in the top of the table after the last few years in NIHL 2.  We all need to work together, work hard, and hopefully we will be fighting for the top spot once more.”

Murray talks about how Trendall will need to carry on the work he was doing last season,

“Alex understands that he has to be consistent with his performances, and with no easy games in NIHL 1 he won’t be able to go missing in the game.  He has solidified his role in the top 6 forwards for our team, and as a result I will be expecting him to be producing points similar to last season.”

Trendall will be returning in shirt #10 next year.  If you are interested in sponsoring a Devils shirt, or becoming a club sponsor, please contact devilssupporters@outlook.com.