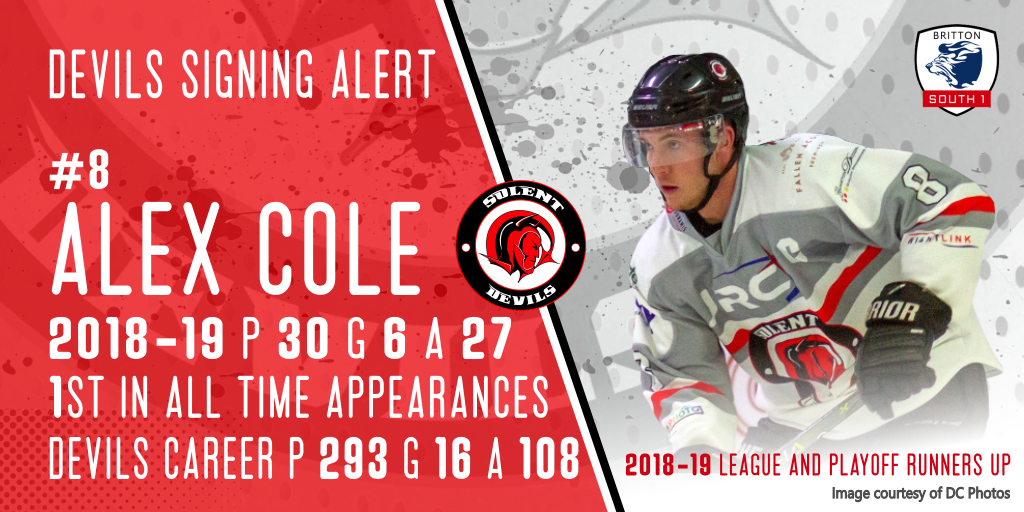 Today, the Solent Devils are delighted to announce the return of team captain, Alex Cole, for his eleventh season in Gosport.

Cole currently holds the record for most appearances for the Solent Devils, and is rapidly approaching 300 games.

When asked what brought this long-standing member of the team back, Cole quips,

“I think the question should be, how have the devils put up with me for ten seasons? All jokes aside, like many players I wasn’t gifted any talent and it took me a long time to decide I want to be the best I can and consistently improve, this takes a long time and its thanks to Alex Murray and the other coaches who did see some potential all those years ago and gave me the shot to work towards what I do now.  I love the team spirit and the dressing room, every year it seems to just get better somehow!”

“Alex is one of the pillars that keeps the Devils stable! He is a loyal, dedicated and highly valued member of my core group of players.  His commitment to the club is unquestionable and so for me it’s a no brainer to have him back in the line-up, wearing the C again.”

Last season, Cole earned 33 points (6 goals and 27 assists), earning him another Devils record – most points in a season for a defenseman.

“My performance last year speaks for itself and I am very happy I got the new record,” says Cole.  “I set myself a target last season, and that was to be more offensive and to make an impact in games and on the scoresheet, instead of just being very defensive and thinking that stopping goals going in and being captain – which comes with many duties – were my only roles.”

“The great thing about Alex is that he is never content on where he is with his development,” states Murray, “He is very humble about his own performances and never believes he has reached his peak, he worked tremendously hard during last season to develop the offensive side of his game and it clearly showed.  Next season the challenge will be to be as influential at a higher level of hockey, against better players, goalies and teams.”

Cole carries on this sentiment, talking about his development and how over the last season he has gone out of his way to get better.

“I always look to improve,” says Cole, “I’ll be working hard this season to get the strength back but I’d like to maintain what I’m doing, if I can get anywhere near what I achieved this season then I will be very happy.”  Letting the fans in on a secret, Cole talks about one of the keys to his success by continuing, “I will be working with my strength and diet coach over the summer and through next season, to push me further and harder into another great year, I cannot thank him enough for where he has brought me physically, and in terms of performance last season proved it.”

Once more, echoing the dedication Cole has given to the team and his own development, Murray says

“I see potential in everyone who wants to work hard.  If you have the right attitude and are open to suggestion, I can help develop you as a player.  Six years ago I saw a player low on confidence but determined to get better, that was all I needed, every year we have focused on little things, and now six years on Alex is an incredibly strong and reliable defender and someone who I know other teams would take in a heartbeat!”

Looking to the new season, Cole is upbeat about the year ahead

“The new league will be a challenge and one we – and I – are definitely ready for.  We need to be pushed but I feel we want to be in the top four.  It’s a lot of time to invest to just aim to survive.  We’re a very good setup and everyone plays because they want to be there, not because they want a pay packet each week.  I’m very excited and I hope the fans are too!”

Cole will be sponsored by Time4Nutrition again next year, returning in shirt #8.  If you would like to discuss sponsorship options with the Devils, contact devilssupporters@outlook.com