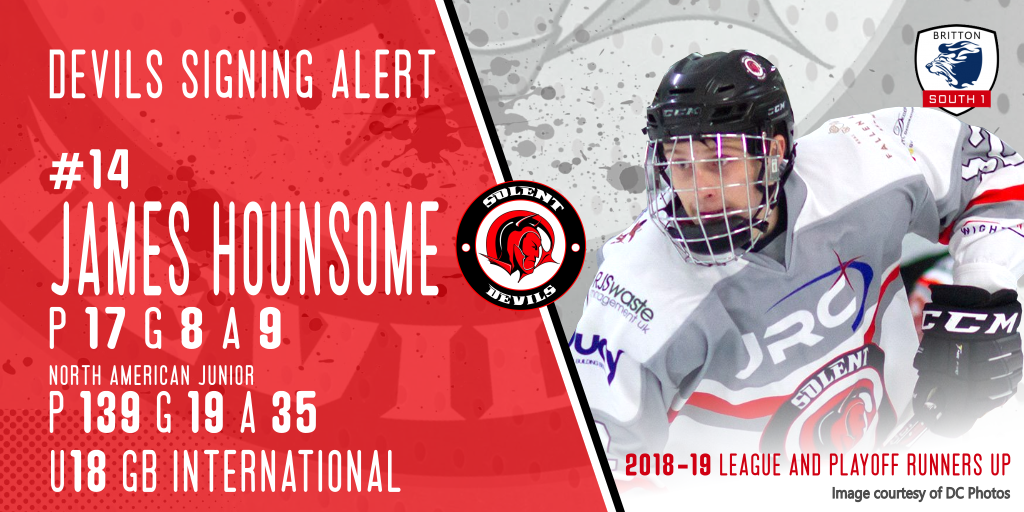 Solent Devils are delighted to announce that James Hounsome has signed for the 2019/20 season.

“I’ve known James since he was in our junior system, I’m sure he would agree this is his hockey home.  Settling in wasn’t a big challenge for James, he has come back to skate at Solent over the summer in the last few years, so already knows a lot of the other players.”

“It’s a family environment in the locker room,” said Hounsome when asked what kept him with the Devils, “the big brother effect of the older players towards the younger guys and the way we, as a team, have great chemistry, it makes it easier to play with anybody in any line, at any time.”

At twenty, Hounsome isn’t what you would typically call an older player, but he has the calm, assured demeanour of one, which, coupled with his experience makes him a valued asset to the team.

“James is a confident guy and he brings a lot of energy to our room,” says Murray.  “Although he is young, he is always talking to the junior players, which is great.”

“I was very happy with my performance last year,” Hounsome reflected.  “Stepping in to a new team, half way through the year, playing almost 18 less games and still finishing top ten in points was something I was very happy with, and being able to help the team make the playoffs was great.”

Murray comments on Hounsome’s late entry to the Devils season,

“James came in during a difficult period in his career, he was recovering from two separate injuries and had fallen out of love with hockey.  My first priority was to get him back fit and enjoying his hockey again.  Thanks to the wonderful off ice team we have at Solent, he soon recovered from his injuries and was producing on the ice, scoring crucial goals along the way.”

As they start to look ahead to the new season, coach and player alike are looking to how Hounsome can continue to help the Devils.

“Consistency is key, last year I went five games without a goal, but still had eight assists,” said Hounsome, “I feel if I had scored in some of those other games, I could have made more of an impact.”

“This is a big season ahead for James, he has everything you need to be an excellent hockey player, size, speed, strength and an unbelievable shot.  The step up in leagues will be a good test for James, as he will be relied upon more this season – I will expect a bigger points return that last season, this is not unrealistic as I know the potential James has!”

Musing over the league restructure, Hounsome seems unfazed by the Devils playing in NIHL 1.

“I think we can’t sell ourselves short because a number has changed on the league name.  It’s not like we are stepping into a shark tank with this new league, we have to prove our worth by beating some of those teams that are moving up with us.  I think how we do depends on how confident we are individually, we have to believe we are the best to achieve what we want this season.”

Hounsome will be returning in shirt #14 next season.  If you are interested in sponsoring a Devils shirt, or becoming a club sponsor, please contact devilssupporters@outlook.com.