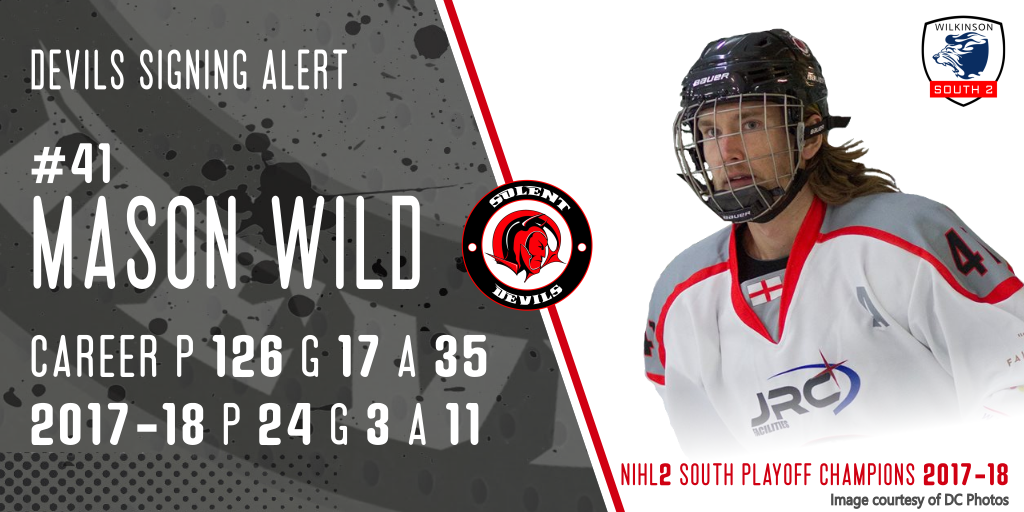 The Solent Devils are today delighted to announce that Mason Wild will be returning to the team for the 2018/19 season.

“I’m really looking forward to it, the Devils are a great group of guys, and seeing as it is pretty much the same team I am excited about my fourth season with them.”

The Devils announced a short time ago, that Wild was leaving the team for a NIHL 1 club (Streatham),

“The reason I moved originally, was because travelling was getting too much from London, but, now that I am moving back to the south coast things are a lot easier, I am very happy to be going back to my original club.”

“I’m delighted Mason is able to return to the club, he is a high quality player at this level and will improve our defensive core!”

“Naturally, I was disappointed to lose Mason this summer, but he had some genuine reasons,”

“travelling from Streatham to Solent twice a week was a costly venture, also the chance to play NIHL 1 is something I would never stand in the way of.  However, once Mason confirmed he was relocated back down south, we spoke on the phone and it was a no brainer for either partner.”

Now, looking ahead to next season, Murray lays down his expectations

“I expect Mason to pick up where he left, he is a leader on and off the ice, not so much vocally, but in his professionalism, hard work and dedication to the team.  Mason will be alternate captain with Mark Pitts this year.”

Wild too, is looking ahead

“As a team, we managed to win the play-offs, but just missed out on the league title, the goal would be to win both this season.  Individually, I want to start putting up more points, especially in the bigger games.  The top half of the league is always competitive, however, I feel like with the team we have, we can achieve the same – if not more – this season.”

Wild will be returning in shirt number 41, and is currently looking for a shirt sponsor. If you would be interested in sponsoring any of the Devils shirts, or becoming a team sponsor, please contact devilssupporters@outlook.com