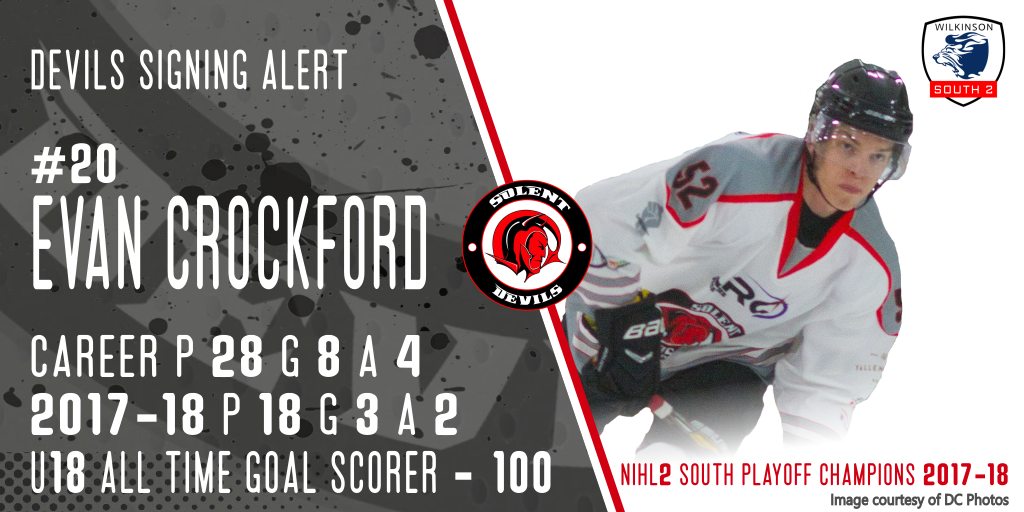 The Solent Devils are delighted to announce the return of Evan Crockford, one of the players who was in the Devils line up for the 11/12 season when they achieved promotion to ENL1.

Crockford came up through the Solent youth programme, and in his 78 games he provided 172 goals and 71 assists. His time in the under 18s team, Crockford holds the records for U18 all time points (147) and U18 all time goals (100).

Crockford then took a break from hockey, returning in the 2017/18 season where he played 18 games for the Devils, contributing three goals and a pair of assists.

When asked what made him come back for the new season, Crockford replied

“There is an unbelievable team atmosphere in the dressing room that is filled with an unprecedented amount of experience. I chose to re-sign with the Devils because of the professionalism of the organisation and the desire to win, and the opportunities to develop under guys who have been there and done it.”

“Evan is a fantastic talent, who grew in confidence last year and continued to improve as he adapted to the standard of the team and league. With his size, natural strength and handedness, it was a no brainer for me to ask Evan back, and I’m delighted he agreed.”

“Looking back on last seasons’ performance, I feel as though my game improved as the year went on,” said Crockford, “however, I know I still have a lot to bring to the team. I am looking forward to completing a full season with the Devils this year, and developing my confidence and skills to help the team reach the next level.”

“It took a couple of games for Evan to fully understand the level of league hockey, but he is a fast learner and so you could see improvements game on game. He would work hard off the ice as well, developing his knowledge of the team’s systems so he was ready for any situation, should he be required.”

“My goals for the season are to retain the play offs and secure the league title.” Crockford said, looking towards next year, “Individually, I want to develop as a versatile player, who can be used to play numerous roles within the team. This will build my trust with my teammates, build my own confidence, improve my skills and really show the spectators what I can do. I know this will take a lot of hard work, so I will be training at full intensity both on and off the ice to put up points for the team and make an impact across the league, with hopes of developing enough to move in to the NIHL.”

Murray, however, declares his trust for the young forward,

“Evan had the trust and confidence from me, he just needs to believe in himself. That said, there will be more expectation put on Evan to produce points next season, as he looks to break into the top six. A big strong left winger is very useful to have, and he understands what I want from him next season.”

Crockford will be returning in shirt number 20, and is currently looking for a shirt sponsor. If you would be interested in sponsoring any of the Devils shirts, or becoming a team sponsor, please contact devilssupporters@outlook.com