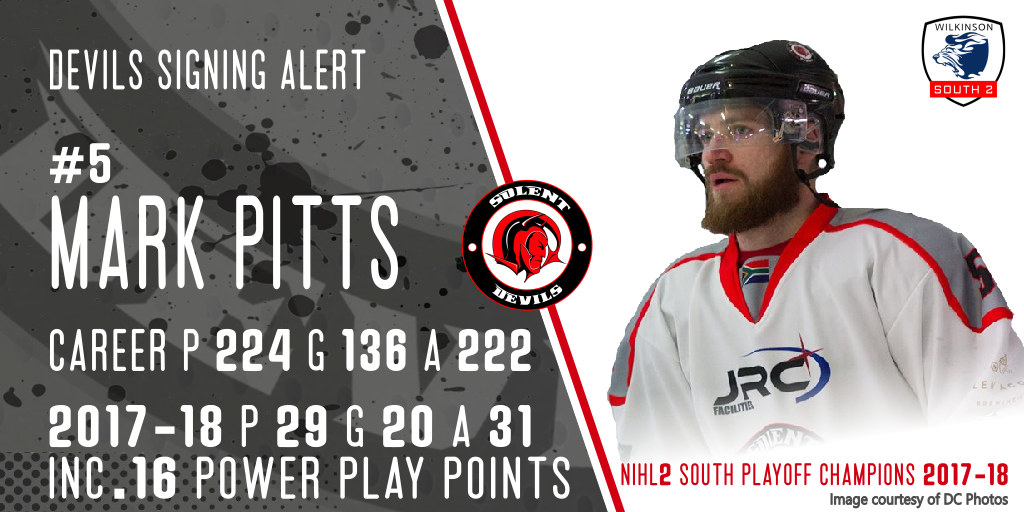 The Solent Devils are delighted to announce that Mark Pitts will be returning for his third year as a Devil.

“Mark was one of the first players I wanted back this year!  Since joining the Devils, he has become a team guy first, and is very respected in the dressing room.  Mark’s energy during training and in games raises the bar for everyone else, keeping the rest of the team on their toes.”

“Deciding to come back as a Devil was always going to be an easy decision to make.  It’s a great atmosphere in the dressing room and a real togetherness about the club as a whole.”

When talking about his performance last year where he was fourth in points for the Devils, in a season where he earned 20 goals and 31 assists – 16 of those points coming in the power play – from his 29 games played, Pitts is factual and somewhat modest, and reflects on his team leading 86 penalty minutes,

“In terms of personal performance last season, I play a fairly physical style of game and at times I struggled to keep out of the box, so my points production was inconsistent.  As soon as a few key players returned, the line became settled and I found the consistency in scoring.”

Murray, when talking about Pitts role in the upcoming season says

“Mark will become an alternate captain for the Devils next season, so his role will change slightly.  The decision was simple for me, he is very well respected in our dressing room, he has a great work ethic and is a team first guy.  With this in mind, I expect Mark not only to be prepared to perform every training and match this up and coming season, but also help bring the younger players through and support them in their development and preparation.”

Looking forward to next year, Pitts goes on to say

“The team Alex [Murray] is building next season, with so many of the key, experienced guys returning, the hungry younger guys and some new faces/old friends joining the club, the goal has to be going one better as a team.  Losing the league by a point was rough, so a league and play off double has to be the target for me.”

“Mark understands his game well and knows his role within the team and plays to his strengths.  He is a player all opposition hate to play against, he scores goals, creates chances and never gives up on the puck.  I will expect Mark to support Alex [Cole] and Richard [Facey] with additional off ice and on ice responsibilities whilst continuing to be able to perform at a high level consistently.”

Pitts will be returning in shirt number 5, and is currently looking for a shirt sponsor. If you would be interested in sponsoring any of the Devils shirts, or becoming a team sponsor, please contact devilssupporters@outlook.com