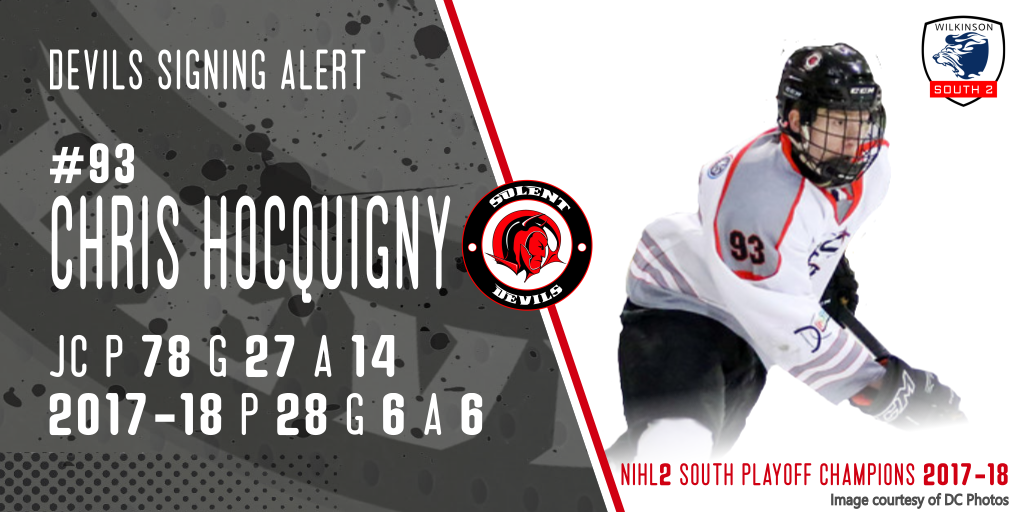 Today, the Solent Devils are delighted to announce the return of Chris Hocquigny to the line up.

Hocquigny won the Shane Clacy award at the Solent Devils 2017/18 presentation, an award given to the player viewed as the most dedicated over a season.  ‘17/18 also saw Hocquigny pick up 6 goals and 6 assists in his 28 games.

“Chris is a great prospect player who came to my attention when the Slough rink closed down over a year ago, he had a great work ethic and was very mature for a teenager.  He has bags more potential and I am excited to see him develop with the Devils.”

On his return, Hocquigny says

Looking toward the future and how the league is developing, Hocquigny says

“The way the league is changing over this off-season suggests this is going to be a tougher league and I feel this benefits everyone, this pushes everyone to work harder.  I’m looking forward to this challenge and it is another test for me.  This will also make it a more interesting league for all the fans and followers, as games will be closer and the league title may not be as clear cut.”

Despite his youth, Hocquigny fitted in well with the more senior Devils last season, a point not missed by Murray,

“Chris has grown and adapted well to senior hockey, he has great speed but also a gritty side which has allowed me to use him across all three lines, as well as the penalty kill and power play last season.”

The Devils have always called themselves a development club, and this is spearheaded by Murray.  Hocquigny, as one of the youngest on the team does not escape this treatment, and Murray goes on to say,

“Chris knows he needs to take the next step and become a key player for the Solent Devils.  If we, as a club, are unable to progress into NIHL 1, Chris is a player I would like to be able to progress on into the league, and for that to happen he has to start putting up a few more points and to continue to develop his game, working hard in training and learning for the experienced players in our squad.”

This talk moves towards Hocquigny’s goals for the upcoming season, and his words show why he won the Shane Clancy award,

“My goals for the season are to develop my personal skills and try to benefit the team as much as I can, whether this me through hard work or putting up points for the team.”

Hocquigny will be returning in shirt number 93.  If you would be interested in sponsoring any of the Devils shirts, or becoming a team sponsor, please contact devilssupporters@outlook.com