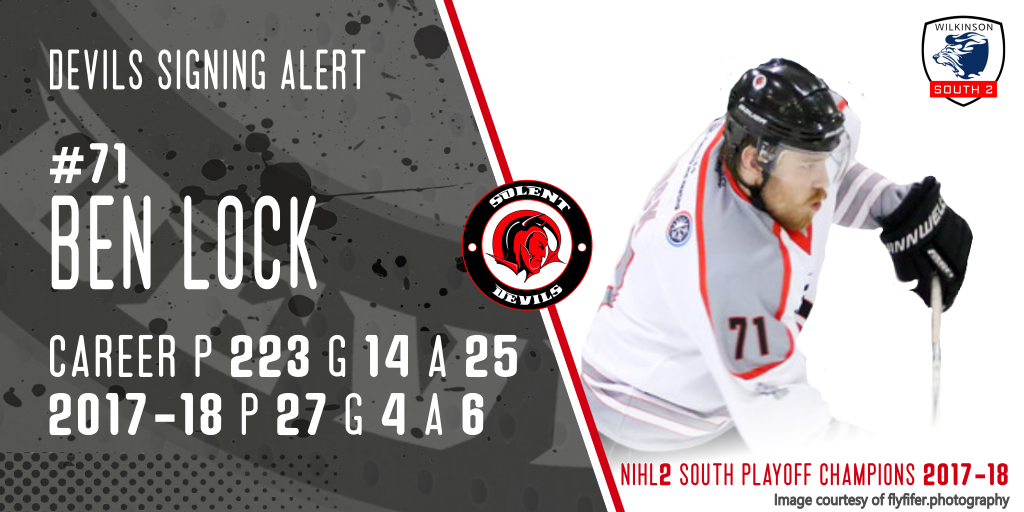 The Solent Devils are pleased to announce that defenceman, Ben Lock will be returning to Gosport for his fifth year in the 2018/19 campaign.

“It was an easy decision to return to Solent.  Since I arrived, the club has grown so much.” said Ben, “The squad Alex [Murray] is assembling is very impressive and we will be tough to beat again.  The team is like my second family and the dressing room atmosphere is incredible, and now, coaching with the junior programme I never thought to leave.”

“I’m delighted Ben is returning for his fifth season with the club.  Ben is a high calibre, solid defenceman.  Ben was our main threat from the point on our power play last season, and he is our best shot blocker.”

Lock’s stats for last year were 4 goals and 6 assists in his 25 games played.  These points make up a large proportion of all the points in Lock’s 223 adult career, where he now totals 14 goals and 25 assists.  Lock also won the 2017/18 Solent Devils award for Best Defenceman.

“My goals are very similar to my previous seasons, try to keep everything simple – block shots and protect our own end.  I’ve built up a good partnership with Alex Cole, which is good as we play a very similar game.  If I could chip in with a few more points next year, that would be a bonus!”

This partnership didn’t go unnoticed by Murray either,

“Ben’s partnership with Alex Cole was exceptional,” said Murray, “and I will likely be looking for the same from Ben again.  Ben needs to continue with his strong defensive plays, as well as influencing our special teams again.”

As the talk of next season continues, and the pressure the Devils will be under following their fantastic season in ‘17/18, Lock simply states

“Personally, it won’t affect me.  Every season, I take it a game at a time and never look too far ahead.  Since we decided to enter NIHL 2, we have had a target on our back as one of the top teams.  Now, being play-off champions, we have to keep the momentum going, and by doing what Murray preaches in practice that will win us more silverware.”

Obviously, being second place in the league and play off champions is big talk over the summer, and the Devils themselves are wanting more for their trophy cabinet, Lock being no exception to this

“I’m looking forward to challenging for more silverware again.  Every year the league gets tougher and it makes the games much more exciting.  I know Murray has some brilliant plans for our squad, and I can’t wait to get to work in September.”

Lock will be returning in shirt number 71.  If you would be interested in sponsoring any of the Devils shirts, or becoming a team sponsor, please contact devilssupporters@outlook.com